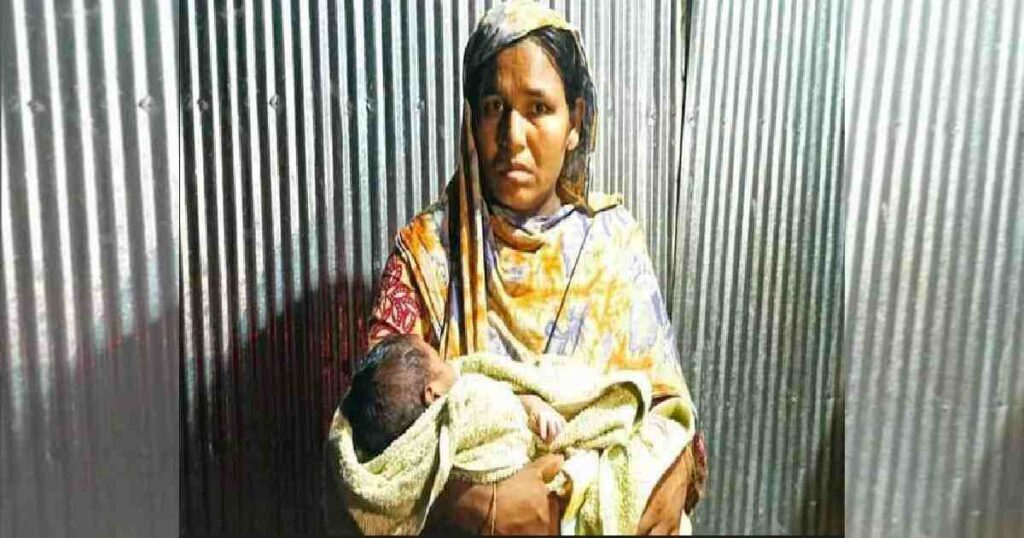 A physically-challenged woman, who had to sell her newborn due to poverty, got back the baby with the help of the Aditmari Upazial Nirbahi Officer (UNO) on Friday.

UNO Mohammad Mansur Uddin handed over the baby to Hasina Begum, 35, at night and assured her of providing a house and government allowance.

Sources said Hasina Begum, daughter of Azizar Rahman of Noyatari village in Aditmari upazila, was married off to Joktar Ali of Teparhat village 18-20 years ago. Hasina was the second wife of Joktar.

Hasina returned to her father’s house a few days after her marriage and has been staying there since then maintaining relations with her husband. The couple has two sons and one daughter.

By the time, Hasina managed to marry off her daughter. She used to bear her family expenses working as a day-labourer with her two sons—Hasan and Russel.

On Tuesday, Hasina gave birth to a baby boy. But her husband sold the baby to a couple in Rajarhat at Tk 20,000.

After selling the child, Joktar repaid Tk 10,000 he borrowed from others during the ‘lockdown’ enforced due to coronavirus.

On Friday, a news titled ‘Mother sells child at Tk 20,000 due to poverty’ was published in a daily which drew the attention of the Aditmari Upazila Nirbahi Officer.

Later, UNO Mansur Uddin along with officer-in-charge of Aditmari police station Saiful Islam went to Hasina’s house on Friday afternoon and made a phone call to the couple in Rajarhat to bring back the child.

Following the UNO’s request, the couple agreed to return the baby.

On Friday night, UNO Mansur and the OC again went to Hasina’s house with the child and handed over the child to her.

“I’ve got my child back. They’ve also assured me of giving a house and allowance. May Allah bless them,” said Hasina.

UNO Mansur said, “We’ve handed the child over to Hasina and gave her Tk 10,000 on behalf of the Social Welfare Minister. Besides, she will be enlisted in the list of physically-challenged people who get government allowance and a house will be given to her brother Keramot.”

Besides, necessary treatment will be provided to her son, if needed, the UNO added.