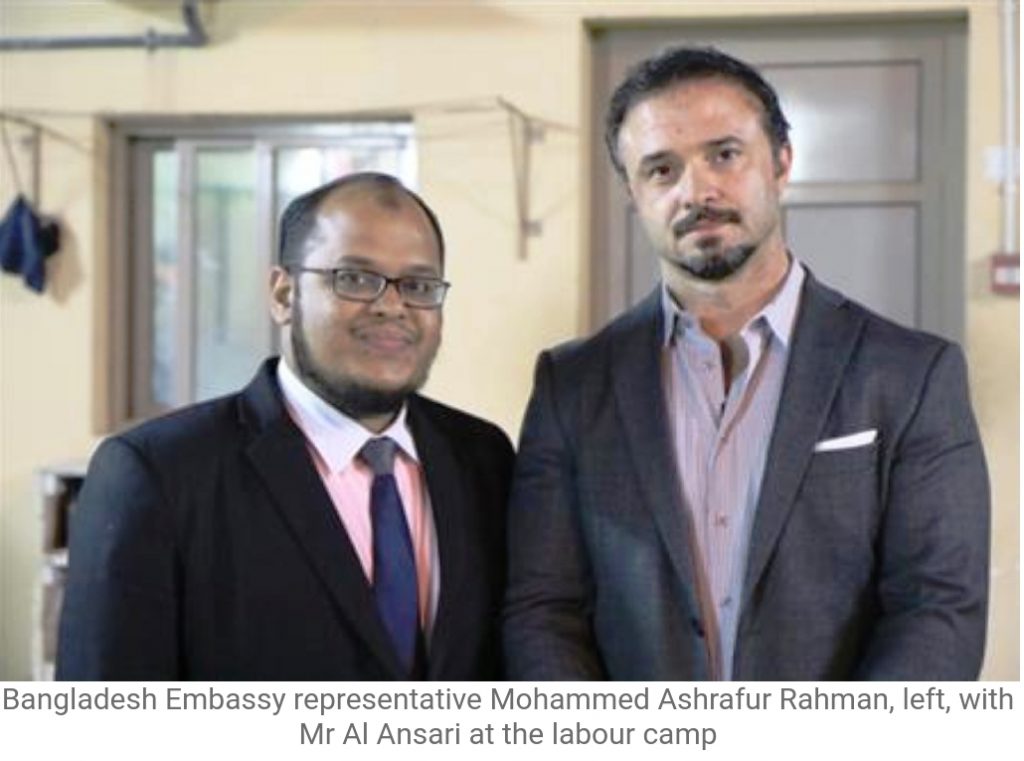 A Bahraini employer has taken the lead in initiating programmes to help workers lead a stress-free life in the wake of a rising number of expat suicides.
Waheed Al Ansari, owner of Areena Contracting that employs 1,000 people, mainly expatriates, has joined hands with the Bangladesh Embassy to conduct the first set of stress management and mind relaxing programmes which targeted nearly 70 employees.
The three-day programme, which included stress relieving exercises, yoga and meditation, was organised by the embassy and held at one of the company’s seven labour accommodations in A’ali.
The GDN has so far reported on eight suspected suicides in Bahrain this year, the latest being Indian Sachin Mohan who died on Wednesday after intentionally consuming a large dose of blood pressure pills.
The rising numbers of suicides among the expatriate community has prompted social workers and community organisations to intensify outreach initiatives.
“I am happy that I could join hands with the embassy in conducting these sessions for my employees,” Mr Al Ansari told the GDN.
“Our policy as a business is to ensure that our employees are happy and stress free which can be attained by making sure we gain their trust.
“I believe I have that relationship with my staff – they are free to talk to me or my officials if they have any problem and every once in a while I visit all my camps and take time to talk to them in person.
“We know the overall financial situation is not bright and there are non-payment and lack of business issues, which puts both employers and employees under stress. This could be one of the many such reasons that could make a person think of taking his life.
“I took a lead in this initiative as I am concerned about the rising suicides among expats and if this programme can help my employees become relaxed then why do we spare from that effort?
“I think all employers should conduct these sessions for their employees.”
Bangladesh Embassy labour consul Shaikh Tahidul Islam, meanwhile, said that the free programme was part of outreach projects targeting low-income workers as diplomats aim to curb the number of suicides.
“We are happy that we could initiate the programme and we plan to continue this by extending it to other labour camps,” he told the GDN.
“The only hitch is that people come late after work and they seem tired for the evening sessions, as they say, but once they realise the larger benefit of these programmes, I am sure they will be happy.
“We will be conducting this on an ongoing basis as we are really concerned about the rising suicides among expats.”
The sessions were conducted by trained instructor Rithin Raj from the Art of Living Bahrain, which is a volunteer-based humanitarian and educational non-governmental organisation.
“These are simple exercises and breathing techniques which will help them get better sleep and in turn make them more energetic and positive,” explained Mr Raj.
“The men seemed to be enjoying it when they gathered to spent some time together which otherwise might have been time they used to spend alone.”
The GDN reported last week on community efforts being stepped up to tackle the rise in suicides, with 37 registered cases among foreigners, mostly Indian nationals, in 2018 compared with 16 suicides in 2017.
The Indian Community Relief Fund (ICRF) operates suicide helplines and it is in the process of distributing 10,000 anti-suicide posters and flyers.
Seventy of its “gatekeepers” have already started taking part in support programmes, including manning a suicide helpline (38415171), while it also plans to train at least 30 more.
Other initiatives have seen suicide hotlines (35680258, 38024189) launched by Pravasi (Expatriates) Guidance Forum, a group of volunteers in Bahrain.
Another group called Palisha Virudha Samithi (Committee Against Interest) last year stepped up activities targeting loan sharks, as high interest on illegal loans was believed to be a factor in people choosing suicide as a way out. It has also set up suicide hotlines on 33882835 and 38459422.
raji@gdn.com.bh