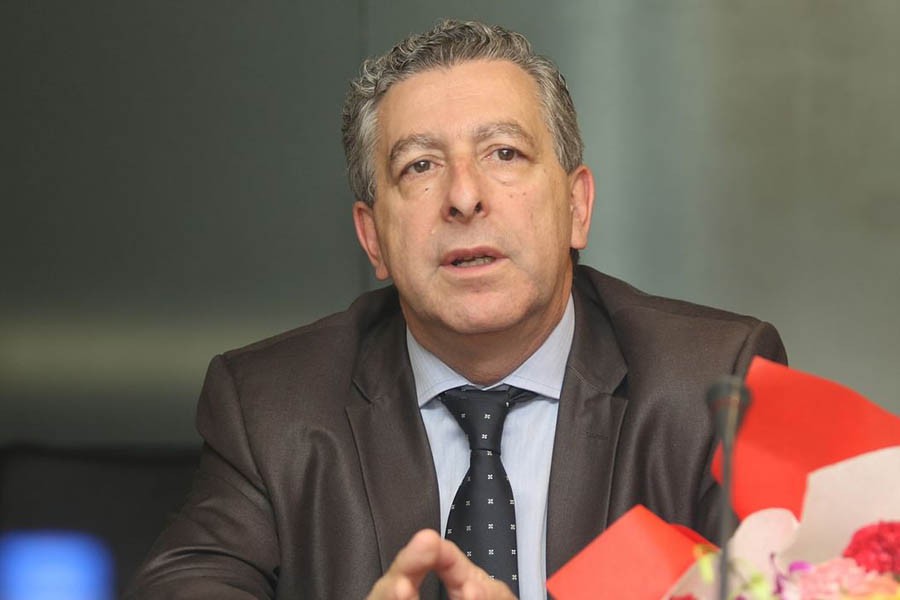 Dhaka, Feb 14 (UNB) : Brazilian Ambassador to Bangladesh Joao Tabajara de Oliveira Junior has said Bangladesh and Brazil can make a stronger alliance on trade and economic front getting out of the current pandemic situation in a “more creative way”.
“We’ve to get out of this (pandemic situation) stronger than before,” he told UNB in an interview, adding that countries will have to be more creative in the post-Covid era.
Ambassador Tabajara said the government of Bangladesh remains committed to the current path of exiting from the least developed countries (LDCs) group.
He said there might be many challenges in the trade area after Bangladesh graduates and Bangladesh needs to develop trade agreements with various markets to expand export going beyond the traditional markets.
Tabajara said Brazil believes that Bangladesh-Brazil can make a stronger alliance considering Bangladesh a big economic power. “It has nothing to do with the size of the country, but the size of the economy and market is huge.”
The Brazilian Ambassador said he sees much more spaces for cooperation and everybody can have normal access to each other’s market.
Asked whether he was successful to show Bangladesh a new Brazil, the Brazilian envoy said he believes he is getting to do this despite the Covid-19 situation.
One of the great results of that work was the establishment of Brazil-Bangladesh Chamber of Commerce and Industries (BBCCI), said the Ambassador.
Brazil is South America’s most influential country, a rising economic power, and it has made major strides over the past few years in its efforts to raise millions out of poverty, although the gap between the rich and the poor remains wide.
“Brazil, being the heart of Latin America, could be a new front for trade and investment from Bangladesh,” Ambassador Tabajara mentioned.
He said confidence is very important to develop this partnership and the two countries are trying to promote private sectors between.
Responding to a question on the trade issue, the Ambassador said they are in discussions to ease tariff issues to boost trade between the two countries. The bilateral trade volume is now less than US$ 2 billion.
“We can develop a tariff agreement or arrangement, and this will be a great thing for both the countries,” he said.
Ambassador Tabajara said they have to establish many basic things so that their economies can benefit in the post-pandemic era. “Let’s do something.”
Bangladesh imports sugar, wheat, and cotton from Brazil and exports apparel products, pharmaceuticals, plastics, tableware, vegetable textile fibre, jute goods, and manmade filaments.
Responding to a question on technological cooperation, the Brazilian envoy said they are at the final stage to sign a technical cooperation agreement so that the two countries can start sharing and exchanging cooperation in all the areas that Bangladesh could be interested like agriculture.
“With this agreement, Bangladesh and Brazil can do an agriculture revolution here. With Brazilian techniques, the system of management and methods, everything we developed can be applied here,” he added.
Ambassador Tabajara said such cooperation will help Bangladesh get the fourth time higher production in the agriculture sector without using new land. “I believe, thus Bangladesh can cut dependence on import and can even export more.”
On food security, the envoy said there is a lot of space to develop relations, and food security is one of them.
Amazon Rainforest
The exploitation of the Amazon rainforest, much of which is in Brazil has been a major international worry since the wilderness is a vital regulator of the climate.
Sought comment on that, the Ambassador said Brazil remains very active in this part. “The new government is giving a new strategy and structure to protect Amazon.”
“Amazon is very rich. You’ve everything there. It’s a paradise of natural resources. Now there’s a new national force to deal only with the Amazon issues comprising air force, navy, and army,” said the Ambassador.
More than 1,200 square kilometers of forest in the Brazilian Amazon was wiped out in the first four months of 2020, a 55% increase from the same period last year, international media reported quoting the government agency which tracks environmental destruction via satellite images.
Ambassador Tabajara said Brazil was one of the most active countries in the climate change deal negotiations.
Public Diplomacy
Responding to a question on public diplomacy, the Ambassador said he has enormous agenda here but things go slow due to the Covid-19 situation.
“Brazil now has a better image and it’s better known than before. We’ve embassy here since 2010 but it was known to all. But now people know well about our presence,” he said.