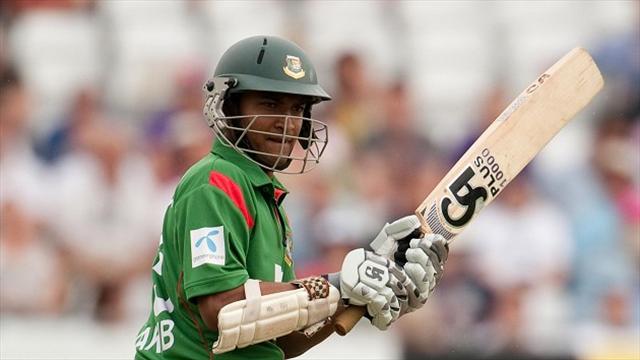 SYDNEY: Shakib Al Hasan is cricket’s top-ranked all-rounder and coach Chandika Hathurusingha expects him to play a leading role in Bangladesh’s quest for another big scalp at the World Cup.
While Bangladesh’s deeds have been modest at Test level, the Tigers have beaten Australia by five wickets in an ODI at Cardiff in 2005 before knocking India out of the 2007 World Cup to move beyond the first round for the only time in the tournament.
Bangladesh start their 2015 World Cup campaign against debutants Afghanistan in Canberra on Wednesday and Hathurusingha, who has coaching experience in Australia, is tipping big things from Shakib.
“We’ve got the No.1 all-rounder in all formats of the game … he’s a key player for us, I’m expecting him to perform and take a lead role and lead us from the front,” Hathurusingha said.
“I think you have seen him a little bit for Melbourne Renegades. He’s an explosive batter when he gets in and he can control the game, and he’s a very clever bowler.”
Shakib is the only Bangladesh player from the current squad to have played some cricket in Australia in the months leading up to the World Cup, having had a short stint with Melbourne Renegades in the Twenty20 Big Bash League.
“I think winning for any team is important, (but) for Bangladesh especially. This is an opportunity for them to prove where they’re at with world cricket,” said Hathurusingha, who was New South Wales assistant coach when they won the Sheffield Shield final last year.
“So winning, for me, is the No.1 thing, it’s not just participating, but the key for us is to perform to our expectation, our standard.
“If we do that, certain games we’ll surprise the opposition.”
Shakib has been Bangladesh’s talisman since 2009 and his all-round form has hardly dipped despite the team’s rollercoaster win-loss record during that period. SAMAA TV/AFP