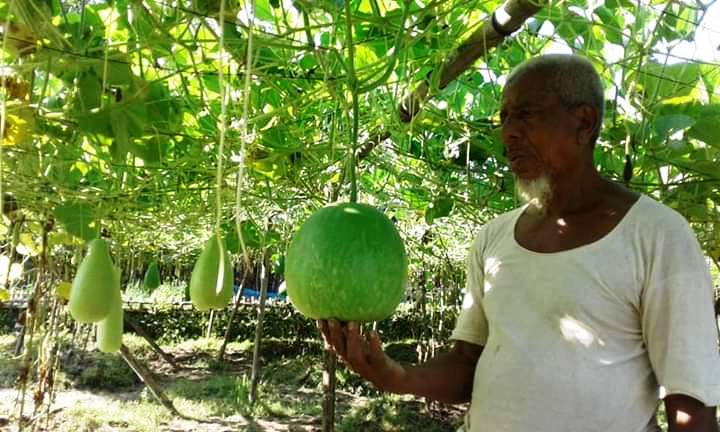 Farming is not always an easy job for many reasons, but there is nothing hard in growing gourd. The people of Bishwanath upazila are showing how to do it and make money.This time, the upazila is witnessing bumper production of gourd as the popular vegetable is seen hanging in plenty in the fields maintained by farmers of the area.
Locals said each farmer is said to have made three times their initial investment of Tk 2,000 only. Seeing the better yield, many people from neighbouring areas are taking increased interest in farming the fast-growing creeper.
According to villagers, the demand for gourd is also high due to its chemical-free cultivation.
They said the gourd remains free from poisonous chemicals as farmers use natural fertiliser in large quantity instead of using pesticide or chemical fertiliser in farming gourd.
Chanfur Ali, a farmer of north Daulatpur Hasnarajir village in north Daulatpur union of Bishwanath upazila, said he got success on farming gourd on 8 decimals of land without using insecticide and chemical fertiliser.
After his success, he said, the other farmers of the village became interested to grow gourd. They also started cultivating gourd like Chanufur Ali. Like other vegetables, gourd is now cultivated in most arable lands of the village.
“I’ve started growing gourd on about 8 decimals of land spending about Tk 2,000. So far, I’ve sold gourd worth Tk 10,000. I hope to sell more of about Tk 20,000 to Tk 25,000,” said Chanfur.
Abdul Hamid, a resident of Purangaon Konapara village in the upazila, said he was also successful in cultivating the same variety of gourd. He cultivated gourd only on 12 decimals of land. So far, he sold gourd worth about Tk 10,000 and hopes to sell more.
Wab Ali, a gourd farmer of Karikona village in the upazila, said, “No one has to work hard for cultivating gourd. It’s possible to earn Tk 10,000 by investing about Tk 1,000 on five decimals of land.
However, he said, regular nurturing of plants is needed alongside ensuring high-yielding variety of seeds. “After preparing land, a better variety of seeds must be planted. Bumper production of gourd is possible after taking care of it regularly. I’ve become successful in gourd cultivation by applying the method.”
Arosh Ali, a retailer, said, “There’s no poison in the gourd cultivated in the villages of Bishwanath. So, the buyers feel encouraged to buy these gourds.”
Shamim Mia, a buyer, said, “We try to buy gourds from the market which have been cultivated in these villages. The flavour and smell of these gourds are good.”
Ramjan Ali, the local Agriculture Officer, said most of the farmers are gaining success by growing early variety of gourd. Suggestions for cultivating gourd is provided to the farmers from the Agriculture Office, he added, reports UNB from Sylhet.