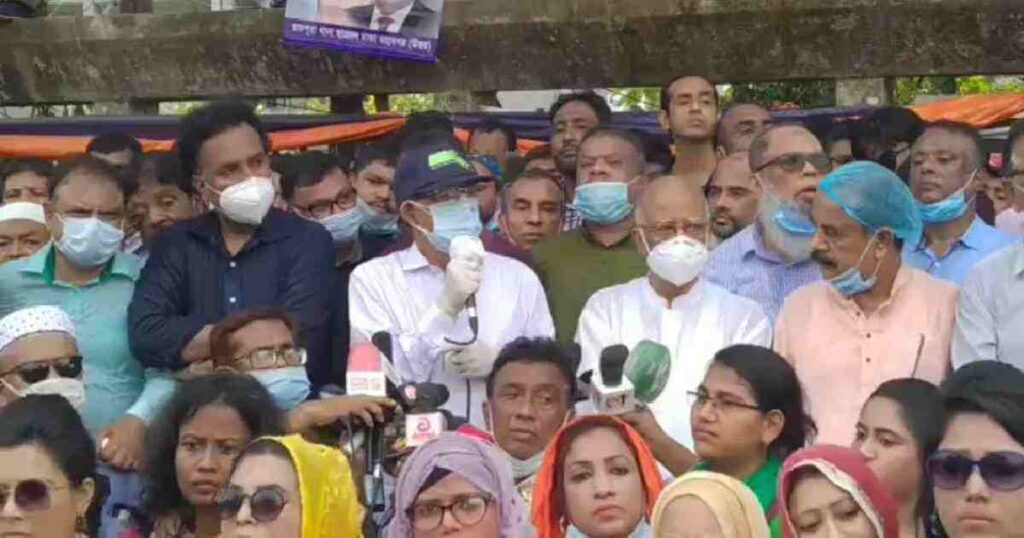 BNP on Wednesday alleged that the womenfolk in Bangladesh has become very helpless and deeply worried over their security due to the recent spate of rape and sexual harassment “by ruling party men”.

Speaking at a human-chain programme, BNP Secretary General called upon the government to quit shouldering the responsibility for widespread plundering, repression on women and misdeeds by Awami League leaders and activists.

“I think the terrible, tragic and disgusting incident in Noakhali’s Begumganj has shaken not only the entire nation but also the entire world. Sexual violence against women and repression on them has become order of the day over the last few months with the backing of the current illegal regime,” Fakhrul said.

He said, “The economy is on the verge of collapse alongside the serious deterioration in law and order. Now people have no security of their lives and property. Our mothers and sisters have become extremely helpless and they’re seriously worried about their security at every moment.”

The BNP leader said the government has taken the country to such a dire situation that its existence is now at stake. “It happened since this government is not elected with people’s votes and it came to power without people’s mandate. They usurped power by resorting to vote robbery at the dead of night.”

BNP’s Dhaka south and north city units jointly arranged the programme in front of the Jatiya Press Club, protesting the rise in violence against women, including rape, across the country.

Fakhrul said the people of the entire country have now burst into anger protesting the violence against women and the government’s misdeeds. “We would like to clearly say that the current government has lost its all legitimacy to cling to power.”

Referring to Awami League General Secretary Obaidul Quader’s recent comment that the government cannot avoid the responsibility for the surge in rape incidents, he said his ruling party counterpart apparently “admitted that they’re abetting the incidents of rape, looting, torture and oppression.”

“So, we urge you to step down immediately and take steps for establishing a government of people by holding a credible election under a neutral government and the impartial Election Commission, or else, people will force you to quit.”

He said the rape and sexual harassment of women have taken such a serious turn that BNP and other political parties cannot remain silent and sit idle. “We all should unite and protest irrespective of religion, caste and creed against all these injustices, adultery, and unfair acts, and remove the monstrous regime. Let’s move forward and achieve that goal.”

Fakhrul said their party leaders and activists will form human chains and hold protest rallies in all districts across the country on Thursday protesting the violence against women.