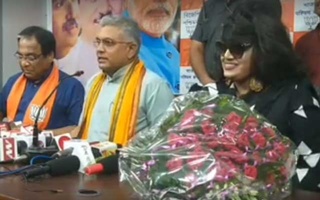 The Bharatiya Janata Party (BJP) inducted Bangladeshi actor Anju Ghosh into the party on Wednesday.
Ghosh is known for her role in Beder Meye Josna (1989), the highest-grossing movie in the history of Bangladeshi films. Later, she moved to Kolkata and started working in the Bengali film industry.
While inducting her into the party, West Bengal BJP president Dilip Ghosh handed over the party flag to her at the state BJP headquarters in Kolkata. “Today, popular film actor Anju Ghosh is joining our party. She had wanted to join BJP for a long time. Now, we have got the real Beder Meye Josna,” the BJP leader said.
The 63-year-old actor, who has been away from her acting career for a very long time, said she was happy to join the BJP.
At present, she lives at Salt Lake in Kolkata. When asked to clarify whether she was still holding the Bangladeshi citizenship, the actor did not respond.
Before the Lok Sabha elections, the BJP had raised objections when Bangladeshi actors Ferdous Ahmed and Gazi Abdun Noor were seen campaigning for the ruling party.
The BJP had raised the issue with the Election Commission and the Ministry of External Affairs, following which the visas of the actor were cancelled and they were asked to return to Bangladesh.
Besides the actor, several gram panchayat members belonging to Congress and CPM parties from North 24 Parganas district joined the BJP.
The BJP state president claimed that a large number of TMC MLAs wanted to join the BJP, but was apprehensive of the ruling party.
“There are some TMC MLAs who wish to join us. But they are scared as the TMC might put them in some legal complexities. They may get framed in false cases too. But still, some are braving the threats and approaching us. They are not joining the BJP for gains, but to get relief from the atrocities of TMC, which does not have any ideology,” Ghosh said. – Indian Express