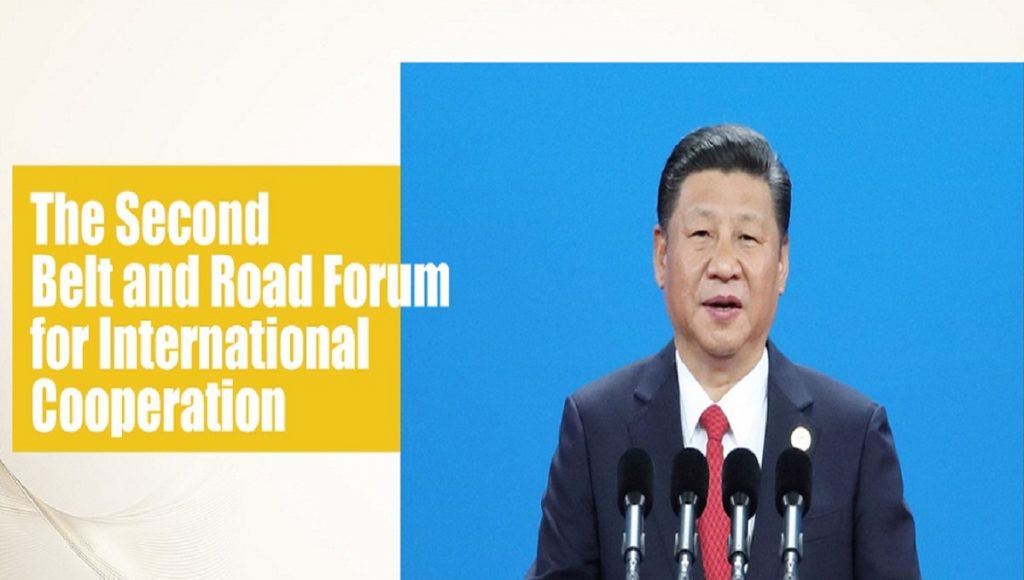 Dhaka, April 24 – A three-day second Belt and Road Forum for International Cooperation (BRF) began in Beijing on Thursday.
Industries Minister Nurul Majid Mahmud Humayun left Dhaka for Beijing on Wednesday to attend the BRF, said an official.
Under the Belt and Road Initiative framework, China wants to share its development experiences with other countries and improve connectivity between Asia and Europe and Africa.
Ahead of the second BRF, Prime Minister’s International Affairs Adviser Gowher Rizvi on Saturday said Bangladesh welcomed China’s Belt and Road Initiative (BRI) as it fits Bangladesh’s national priorities.
“Bangladesh is proud to be part of this initiative,” he said while addressing the launching ceremony of the first magazine in Bangladesh, “The Belt and Road” exclusively covering the highlights of the vision of “The Belt and Road Initiative.”
The BRI is a multi-billion-dollar initiative launched by Chinese President Xi Jinping. This mega initiative emerged when President Xi came to power in 2013.
During Xi’s historic visit to Dhaka in 2016, Bangladesh formally joined the ‘Belt and Road Initiative’, a drive which has already drawn the close attention of the world.
Chinese President Xi Jinping will deliver a keynote speech at BRF, State Councilor and Chinese Foreign Minister Wang Yi said.
Leaders, including heads of state and government from 37 countries, will attend the forum’s roundtable summit, according to Xinhua.
China’s Belt and Road Initiative, proposed by President Xi Jinping nearly six years ago, has made practical progress, with 125 countries and 29 international organizations have signed 173 cooperation agreements under the initiative framework as of March 27, according to China Daily.
Under the initiative’s five cooperation priorities of policy coordination, facilities connectivity, unimpeded trade, financial integration and people-to-people bond, there are a batch of projects, such as transportation construction and industrial infrastructure, in full swing or already has yielded fruitful results, the Chinese daily reported.
Some 12 thematic forums and a CEO conference would be held on Thursday, the opening ceremony and a high-level meeting on Friday and the leaders’ roundtable on Saturday.
Xi will also chair the leaders’ roundtable and brief media from home and abroad about the outcomes after the roundtable, Wang said, adding that Xi and his wife Peng Liyuan will also hold a welcoming banquet for the leaders and representatives.
According to Wang, the 37 countries are Austria, Azerbaijan, Belarus, Brunei, Cambodia, Chile, Cyprus, Czech Republic, Djibouti, Egypt, Ethiopia, Greece, Hungary, Indonesia, Italy, Kazakhstan, Kenya, Kyrgyzstan, Laos, Malaysia, Mongolia, Mozambique, Myanmar, Nepal, Pakistan, Papua New Guinea, the Philippines, Portugal, Russia, Serbia, Singapore, Switzerland, Tajikistan, Thailand, the United Arab Emirates, Uzbekistan and Vietnam.
The secretary-general of the United Nations and the managing director of the International Monetary Fund will attend the forum, Wang said, adding that senior representatives of France, Germany, Britain, Spain, Japan, the Republic of Korea and the European Union will also participate.
Noting that the BRF is the top-level platform for international cooperation under the framework of the Belt and Road Initiative, Wang said the conference next week would be of landmark significance.
The theme of the second BRF is “Belt and Road Cooperation, Shaping a Brighter Shared Future.” Wang said the main purpose is to promote the high-quality development of Belt and Road cooperation, which is the common aspiration of countries participating in the initiative.
Speaking highly of the fruitful results yielded since the initiative was launched in 2013, Wang said the second BRF was greatly welcomed worldwide with some 5,000 participants from more than 150 countries and 90 international organisations have confirmed their attendance, covering areas from five continents and different walks of life such as government, civil society, business and academia.
According to Wang, this year’s forum will have 12 thematic forums, twice of that during the first forum in 2017, and the CEO conference will be held for the first time.
The Belt and Road Initiative, proposed by Xi in 2013, aims to enhance all-around connectivity through infrastructure construction, explore new driving force for the world economic growth, and build a new platform for world economic cooperation, according to Wang.
Stressing that Xi and leaders from other countries blueprinted the initiative in 2017, Wang said the progress in the past two years shows that the initiative conforms to the trend of the times featuring peace, development, cooperation and win-win and accords with the common aspiration of openness and joint development of all countries.
“As the host country, we’ll maintain close communication and coordination with all parties to prepare for the forum with openness, inclusiveness and transparency, upholding the principle of consultation and cooperation for shared benefits,” Wang said.
He said the forum would voice the firm support for multilateralism and an open world economy, enrich the principles of cooperation of the Belt and Road Initiative, build a network of partnership, and establish more mechanisms for high-quality development.
Bilateral, trilateral and multilateral cooperation has been reinforcing each other under the initiative, laying a solid foundation for a closer and more wide-ranging partnership, he said.
Wang said China will showcase the outcomes and introduce the measures of its reform and opening up to the world, adding that this will allow China to share the dividends of its economic growth, promote the Belt and Road Initiative, and bring more opportunities to the development of all countries as well as the building of the Belt and Road.
“I believe that the forum will inject stronger impetus into the world economy, open even broader horizon for the development of the countries, and contribute to the building of a community with a shared future for humanity, ” said Wang.- UNB