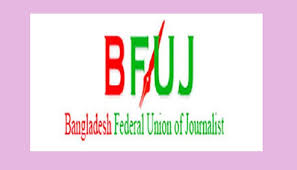 Bangladesh Federal Union of Journalists (BFUJ) is set to stage tomorrow the biennial elections to elect a 56-member executive committee of the apex body of newsmen for the next two years.According to the commission constituted to conduct the election, the voting will be held from 9 am to 5pm in 10 centres in Dhaka and nine other major cities while the number of voters is 3263.Two panels and two independent candidates are vying for the elections.
Incumbent president of Dhaka Union of Journalists (DUJ) Altaf Mahmood and BFUJ’s existing secretary general Abdul Jalil Bhuiyan are leading the two panels called Altaf-Mollah and Jalil-Kamal panels.Former DUJ president Omar Faruque is contesting as the independent candidate for the BFUJ’s secretary general post with his rivals being Mollah Jalal and Khairuzzaman Kamal from the two panels.Jafar wazed stood for the vice president’s post from the Altaf-Mollah panel while Nasimun Ara Haq Minu appeared as his rival for the position from the other panel.The commission officials said they were expecting to announce the result overnight counting the votes through electronic voting machines. The position of treasurer is being contested by Modhusudan Mandol and Ataur Rahman.
Source:BSS