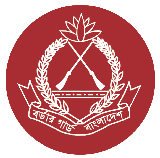 A BGB member was killed in a clash with Hefajat –e-Islam activists at
Narayanganj was buried at his village Saljhor under Bhurungamari
upazila in Kurigram district recently.
The dead body was taken in his village from Dhaka by a helicopter at
noon on Thursday. A huge number of people gathered there to see the
body at a glance.Commanding officer of 45 Kurigram BGB Battalion
Lt.col Zeaul Haque Khaled, Bhurungamari upazila Nirbahi Officer AJM
Ershad Ahsan Habib, OC Mahfuzur Rahman, company commander of Deadanga
BOP Mokbul Hossain, Bhurungamari upazila chairman Abdul Hye master
were present among others.When the dead body reached at Bhurungamari
upazila father of the deceased Abdus Sobhan, brothers and sisters
along with the villagers began to wealing. A pathetic shock was
prevailing there. His father demanded exemplary punishment of the
killers who killed his son. The deceased Lovlu Hossain (21) was
recruited as a soldier in BGB in 2011. His father is a farmer and the
mother died earlier. He was the 4th among his six brothers and
sisters.He was seriously injured when was performing duty at
Narayanganj, the activists of Hefajat-e-Islam attacked him. He was
taken to Dhaka Medical College Hospital in a critical condition where
he died.
(Source: Kurigram Correspondent)