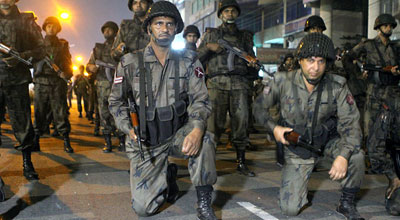 Border Guard Bangladesh personnel on Saturday night seized about 2
kilograms of heroin worth about Tk 2 crore raiding an intercity train
going towards Khulna from Rajshahi.
Lieutenant Colonel Matiur Rahman, commanding officer, 26 Border Guard
Bangladesh, Jessore seized about two kilograms of heroin from down
Kobadak Express train at Jessore railway station at around 7:30pm on
Saturday.
‘The heroin worth about Tk 2 crore was kept in two polythene bags at a
hidden place in the Khulna bound train’, he said adding, ‘ none was
arrested in this regard’.
The Border Guard Bangladesh in separate drive on Thursday seized about
650 grams of heroin raiding the same intercity train. The heroin,
worth about Tk 1 crore, was seized from the toilet of the first
compartment of the intercity train. It was found in abandoned
condition, the BGB CO told newsmen. -Our Correspondent