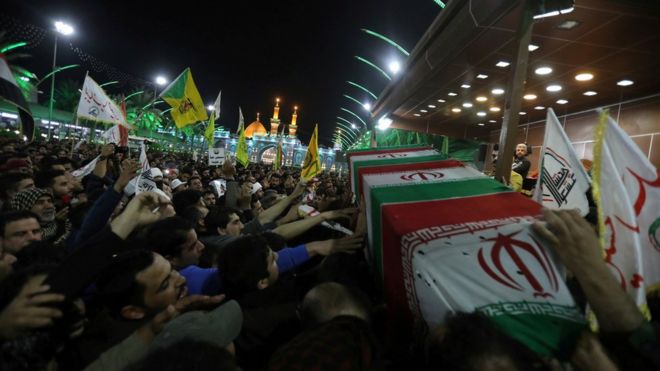 Several blasts shook the Baghdad area hours after a huge funeral procession for a top Iranian general, killed by a US airstrike there on Friday. A projectile hit the Green Zone near the US embassy while several more were fired north of the Iraqi capital at Balad airbase, which houses US forces.

Nobody was hurt in the attacks, Iraqi security sources said.
No group said it was behind the development. Pro-Iranian militants have been blamed for other recent attacks.
Iranian leaders have vowed to avenge the killing of Qasem Soleimani, who was regarded as a terrorist by the US.
President Trump warned on Twitter that the US is “targeting” 52 Iranian sites and will strike “very fast and very hard” if Tehran hits Americans or US assets.
Saturday’s funeral procession through Baghdad and Iraq’s Shia Muslim holy cities precedes the return of Soleimani’s remains to Iran.
Iraqis were also mourning the death of Abu Mahdi al-Muhandis, an Iraqi who commanded the Iranian-backed Kataib Hezbollah group and was killed along with Soleimani.
In another development, the group issued a warning to Iraqi security forces to “stay clear of American bases by a distance, not less [than] 1,000m (0.6 miles) starting Sunday evening”, al-Mayadeen TV reported.
In response to Iranian threats of revenge, the US has sent 3,000 more troops to the Middle East and advised its citizens to leave Iraq.
What happened in the new attacks?
At least one rocket or mortar round hit Celebration Square in the Green Zone, while another exploded in the city’s Jadria area, Iraqi security sources said.
After two rockets hit Balad airbase, surveillance drones were sent up to locate the source, AFP news agency reported.
Reports say the bodies of Soleimani and four other Iranians killed in the airstrike will be flown on Saturday evening to Iran, which has declared three days of mourning for the assassinated general. His funeral in Iran is to be held on Tuesday.
How did the Iraqi stage of the funeral proceed?
Waving Iraqi and militia flags and chanting “Death to America”, mourners walked behind the coffins from Al Muthana Airport to the gate of the Green Zone on Saturday.
Some mourners carried portraits of Soleimani while others held portraits of Iran’s Supreme Leader, Ayatollah Ali Khamenei.
Later, the procession left for the holy cities of Karbala and Najaf.
Some Iraqis, conversely, celebrated in Baghdad’s streets at the news of Soleimani’s death. He was accused of orchestrating violent crackdowns on peaceful pro-democracy protests there in recent months.
How has Iran responded to the assassination?
Its leaders have pledged to avenge the death of the man who led the Quds Force, an elite unit of the Iranian Revolutionary Guard Corps (IRGC).
• Who was Qasem Soleimani?
Soleimani, 62, was widely seen as the second most powerful figure in Iran after Ayatollah Khamenei. The Quds Force reported directly to the ayatollah, and Soleimani was hailed as a heroic national figure.
Visiting Soleimani’s family members at their house in Tehran, Iranian President Hassan Rouhani said: “Revenge for his blood will be exacted on that day when the filthy hands of America will be cut off forever from the region.”
Ayatollah Khamenei promised earlier that revenge would be “forceful” while a senior IRGC general, Gholamali Abuhamzeh, raised the prospect of attacks on US warships in the Gulf.
At a march in Tehran on Saturday, one demonstrator told Reuters: “[Soleimani] was a man who – unlike many of our officials – was an enemy for our enemies and treated our own people very well. Therefore he was very popular. So, the only thing we want of our statesmen and our supreme leader is… to take revenge.”
Simmering US-Iranian hostilities escalated rapidly last week after the US conducted airstrikes in Iraq and Syria against Kataib Hezbollah, which the US blamed for an earlier rocket attack that killed an American civilian contractor. The pro-Iranian militia attacked the US embassy in Baghdad in response.
In a letter to the UN Security Council responding to the strike on Soleimani, Iran’s UN ambassador Majid Takht Ravanchi said that Iran reserved the right to self-defence under international law. Analysts said Iran could deploy cyber-attacks against the US, or attempt to strike US military targets or interests in the Middle East.
Why did the US kill Soleimani?
US President Donald Trump accused “the number one terrorist anywhere in the world” of “plotting imminent and sinister attacks on American diplomats and military personnel”.
But no details were given of the alleged planned attacks and a New York Times correspondent has quoted two unnamed US officials as telling her that evidence of such plotting was “razor-thin”.
Chinese Foreign Minister Wang Yi told his Iranian counterpart, Javad Zarif, that the US killing of Soleimani was an abuse of military power, while Russian Foreign Minister Sergei Lavrov, who also phoned Mr Zarif, said the killing “grossly” violated the norms of international law.
The UK Foreign Office hardened its travel advice for Iran and Iraq.
UK Defence Secretary Ben Wallace also announced that two British warships would resume escort duties in the Strait of Hormuz – a narrow shipping route in the Gulf region through which a fifth of the world’s oil is transported.
In a statement, he urged all parties to “de-escalate the situation”, adding: “Under international law, the United States is entitled to defend itself against those posing an imminent threat to their citizens.” – BBC News