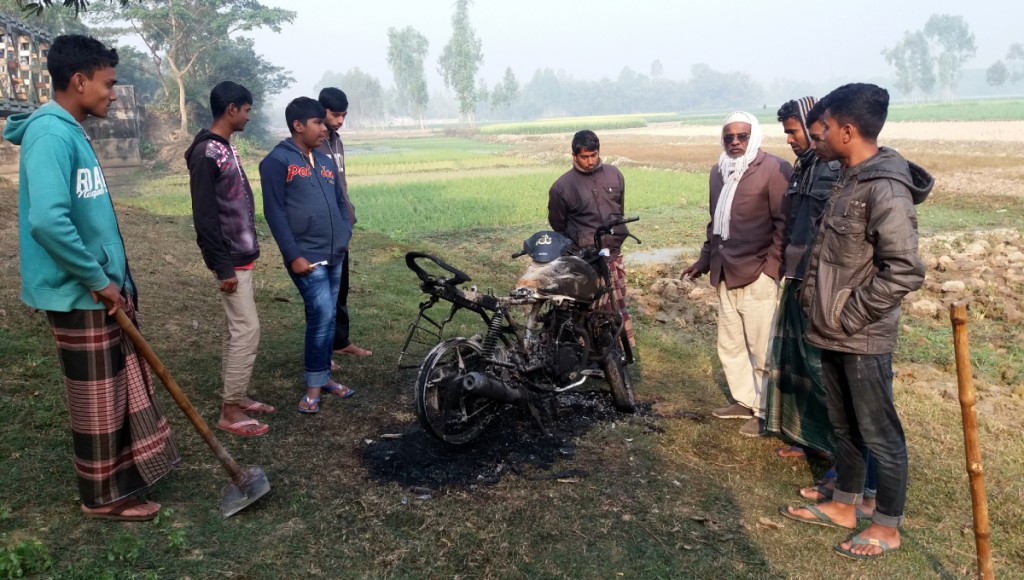 The motorcycle of a local Swechchhasebak Dal leader was torched allegedly by Awami League activists at Gonapara in Sadar upazila on Thursday night.
Sajgar Hossain, general secretary Bambu union unit of Swechchhasebak Dal in Khetlala upazila, said he was made accused in a case on charge of setting fire to an Awami League election camp in the upazila on December 24 and another case was filed against his wife over a clash between AL-BNP men at Battali Bazar on December 30. However, he secured bail from the High Court in the case.
When Sajgar was taking tea at a tea shop in Battali area on Thursday evening, a group of Awami League men, including Faruk Hossain, Tariqul and Mabud Hossain, in motorcycles appeared on the scene, he said.Sensing trouble, the Swechchhasebak Dal leader sped away towards Sotahar in Sadar upazila and the ruling party men also chased him. At one stage, he ditched the bike and fled, locals said.
The AL activists took the motorcycle beneath the Gonapara Bailey Bridge and set it on fire after pouring petrol on it, they said.Md Mominul Haque, officer-in-charge of Sadar Police Station, said they were unaware of such incident. He, however, said action will be taken if they receive any written complaint.