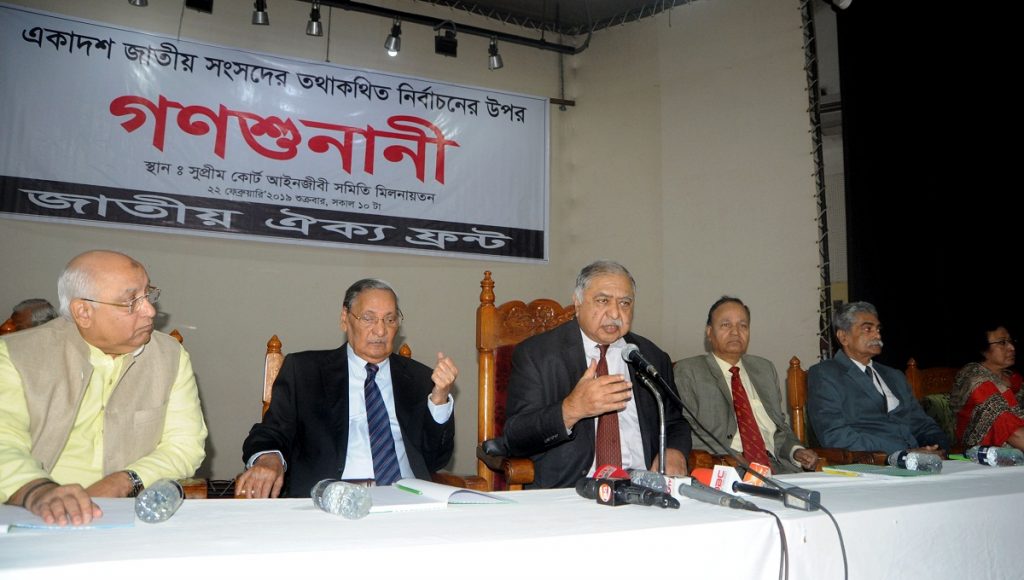 Dhaka, Feb 22 – BNP’s candidates of the 11th parliamentary election who joined Jatiya Oikya Front’s public hearing on Friday, slammed their party senior leaders for not announcing any action programme to get their chairperson Khaleda Zia released from jail.
They also want the party to arrange a hearing of its own candidates to identify its mistakes in the elections and work out its next course of action.
The BNP contestants criticised the Oikya Front senior leaders for not announcing any protest programme before the voting against the repression and biased role of the Election Commission (EC) and the administration.
The public hearing began at the Supreme Court Bar Association auditorium around and continued till 5:30 pm with a one-hour break from
Oikya Front convener Dr Kamal Hossain led a seven-member panel during the hearing. Other members of the panel were Prof Emajuddin Ahmed, ex-judge AKM Anisur Rahman Khan, Prof Nurul Amin Bepari, Prof Dilara Chowdhury, Prof Asif Nazrul and Advocate Mohsin Rashid.
Pointing at party secretary general Mirza Fakhrul Islam Alamgir, BNP’s Noakhali-2 candidate Zainul Abedin Farroque said, “I can forget everything of what happened in the election, but I can’t forget you’re not announcing any programme to free our mother (Khaleda).”
He questioned why there had been no programme after the election demanding her release. “I would like to humbly tell our secretary general we can’t tolerate such inaction anymore.”
Farroque suggested that Fakhrul hold a hearing of the BNP candidates who participated in the elections to find out the party’s faults and asses its election strategies.
He also asked Dr Kamal Hossain why they could not understand beforehand that Awami League was going to hold such an election after the continuous repression and attacks on Oikya Front candidates and their supporters and the EC’s biased role.
“We had lodged many complaints with the Election Commission, but they didn’t respond to any of those. Dr Kamal should have said we wouldn’t go to polls if we’re not allowed to hold a rally in Dhaka on December 27,” he said.
Farroque also criticised BNP senior leaders for not accepting party standing committee member Moudud Ahmed’s proposal to stage a sit-in in front of the Election Commission demanding a proper election atmosphere.
Chattogram-9 seat BNP candidate Dr Shahadat Hossain also raised the same question as to why the alliance did not announce any protest programme when minimum election atmosphere was not created before the voting.
He urged the party leaders to take action programmes immediately to force the government to release Khaleda Zia from jail.
Shama , BNP’s Faridpur-2 candidate, said it will not be possible to oust the current government unless Khaleda is released from jail.
-10 BNP candidate Monirul Haque Chowdhury said their party should hold meetings with its all candidates to identify the reasons behind their failure in the polls despite having vast popularity.
BNP’s Narayanganj-2 candidate Nazrul Islam urged party leaders to announce action programmes seeking Khaleda’s release and give the BNP candidates responsibility to implement those.
Sardar Sakhawat Hossain Bakul, candidate for Narsingdi-4, urged Dr Kamal Hossain to announce programmes from Oikya Front to mount pressure on the government to free Khaleda Zia.
Out of 42 candidates who spoke at the public hearing, around 30 demanded action programmes to free Khaleda Zia as soon as possible.
BNP secretary general Mirza Fakhrul Islam Alamgir and standing committee member Dr Abdul Moyeen Khan joined the hearing, but other party standing committee members did not turn up. – UNB