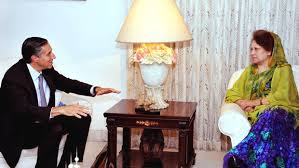 Opposition BNP is hopeful that the initiative of UN Secretary-General Ban Ki-moon for dialogue between the two major parties will lead to an acceptable solution to the country’s ongoing political crisis.

“Discussions are going on and the talks will continue. The opposition leader has welcomed the UN’s initiative for helping political parties in Bangladesh reach a consensus,” BNP vice chairman Shamsher Mobin Chowdhury told reporters on Monday.

Talking to the journalists after a meeting between UN Assistant Secretary-General for Political Affairs Oscar Fernández-Taranco and BNP Chairperson Khaleda Zia at her Gulshan office, Mobin also said, “We hope a solution will be found and the problems will be resolved.”

The meeting began around 2pm and continued for over an hour. The UN official also joined lunch at the opposition leader’s residence after the meeting.

This was the second meeting between the BNP chief and Taranco as he met Khaleda on Saturday and conveyed her Ban Ki-moon’s letter.

Taranco arrived here on Friday and also had talks with the government,opposition parties, the Election Commission and civil society members as tension is growing here over the next national election.

The UN Secretary General had also sent separate letters to the Prime Minister and the opposition leader so that the next election in Bangladesh is held with the consensus of all parties. (Source: UNB)