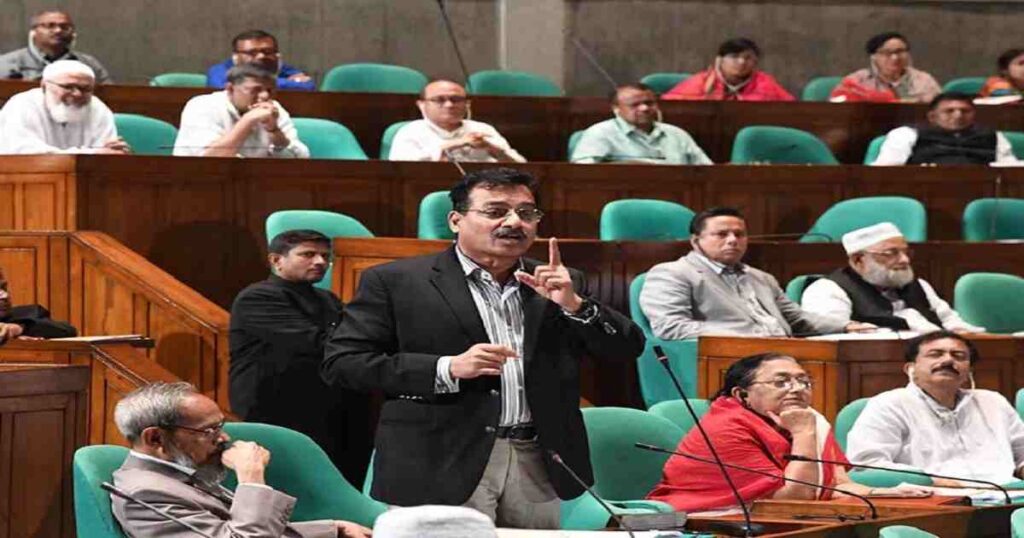 Harunur Rashid, BNP’s MP from Chapainawabganj-3 constituency, on Tuesday demanded the removal of Health Minister Zahid Maleque and bringing competent and committed persons in key posts of the health sector to face the coronavirus situation.

“The Directorate General of Health Services (DGHS) has become a handicapped institution. Change them (key persons in the heath sector), remove the Health Minister. Replace them with competent and committed persons,” he said participating in the general discussion on the proposed national budget for 2020-21 fiscal year in Parliament.

“Has the health ministry visited any Covid hospital and enquired of what are miseries of physicians and patients there?” asked the BNP MP.He claimed that none of its Director General, directors and their personal assistants receive phone calls.

Harun said he had been making phone calls and sending SMS to the Health DG for the last 10-12 days asking him to return call when he was free, but he didn’t do so.

He said that BMA, a pro-Awami League platform, said the responsibility of existing corona crisis goes to the Ministry and the DGHS. Even the recently visited Chinese experts also expressed disappointment over the Covid situation in Bangladesh, he said.

Noting that now a national crisis has been created in the country, Harun said if the coronavirus crisis last for next 2-3 years as said by the DG Health, it will truly be a huge challenge. “So, we need to forge national unity to face this challenge,” he said

He demanded forging a national unity to overcome the crisis and relieve the wounds in the way of national unity by withdrawing thousands of cases filed against country’s top political leaders including Khaleda Zia and Tarique Rahman.

Harun started his speech uttering “Innalillahe owa inna-elahi rajiun”. But Deputy Speaker Fazle Rabbi Miah who was chairing the House at that time asked him why he started his delivery with such words.

“I’ve never seen this tradition during my seven-time membership of parliament that the speech was incepted with such words,” Fazle Rabbi said.In reply, Harun said he would explain as to why he uttered the words, but didn’t explain in his speech.

The BNP MP said absurd target for revenue collection was set in the proposed budget. VAT collection target is much higher than that in the previous budget. “Still there is time. I would like to tell the Finance Minister to place the budget again after revising it,” Harun said.

He proposed increasing the stock of foods to face famine as it was forecasted that two floods may strike the country this time.The MP also proposed raising allocation for the agricultural sector, disaster management sector and social safety net.

Noting that the Inspector General of Police now comes up with new advices for its members, Harun said the police destroyed the rights of the people and helped arrange questionable parliamentary elections.

“It is not possible to establish an honest administration with this police. Now police have turned into a servant force of Awami League,” he said.The Deputy Speaker later expunged ‘questionable’ word from his speech.

Harun sought additional time to complete his speech, but Fazle Rabbi Miah initially refused to give extra time. Later, he asked Harun to speak for one more minute but Harun staged walkout from the House saying he was given the time after getting instruction from the Leader of the House and Fazle Rabbi also interrupted him during his speech.

Joining the discussion later, Opposition Chief Whip Mashiur Rahman Ranga demanded the ruling of the Speaker clarifying who are the opposition as BNP MP Harunur Rashid claimed them as the opposition.

“I think you’ll have to call him to your room for an hour to give him an understanding that how the parliament runs and whether he is opposition, ruling party, militant party or any other party.

“He (the BNP MP) always says they’re the opposition not Jatiya Party. Why does he say this?” Ranga said demanding the Harun’s words should be expunged from the proceedings of the Parliament.