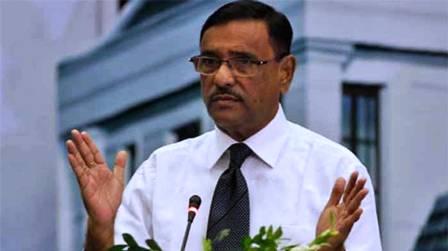 Dhaka, Jan 01 – The ruling Awami League general secretary Obaidul Quader has alleged that BNP had staged a drama on December 30 in the name of joining the polls in a bid to make the polls controversial.“BNP had not taken necessary preparations to join the Sunday’s elections. Deliberately they didn’t give their polling agents on the voting day. Even they didn’t conduct electioneering before the polls.
Actually, they staged a drama in the name of joining the polls to make it controversial,” he said.
The AL general secretary was talking to the reporters at the party president Sheikh Hasina’s Dhanmondi political office in the city yesterday.
About the debacle of BNP in the just concluded 11th parliamentary elections, Quader said BNP and allies have been defeated by a huge margin in the Sunday polls just because of its ‘weak organizational structure.’
Replying to a question over the formation of the new government, the AL leader said the process to form the new government is likely to be completed before the January 10, the homecoming day of Bangababdhu Sheikh Mujibur Rahman.
He also said the gazette notification will be published within one to two days and then the newly elected members of parliament will be sworn in.
“After the completion of the oath of newly elected lawmakers, Prime Minister Sheikh Hasina will meet the President. Then, the President will request the Prime Minister to form the government and then the
premier will form a new cabinet. But all the tasks of forming the new government before Jan 10,” he added.
Replying to a question, he said if any candidate fails to take the oath, the election commission will arrange necessary steps according to the constitution. A new schedule will be announced for a by-election to
the constituency.
“Many democratic countries including India, China, Sri Lanka have already started congratulating Prime Minister Sheikh Hasina. If they do not participate in the democratic process, democracy will not be
halted for them,” he added.
Replying to another question over BNP’s movement, he said BNP doesn’t have any chance to wage a movement protesting at the December 30 polls’ result and said there is no ‘objective condition’ to wage
a movement against the government right now.
Meanwhile, the senior Awami League urged the party’s leaders, activists and supporters not to be revengeful to the opposition and behave carefully. – Staff Reporter