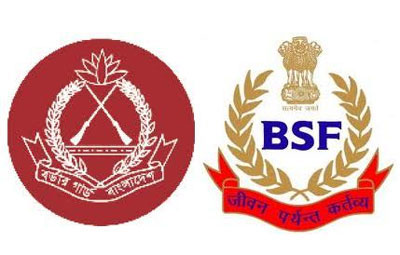 Dhaka, June 15 – The chief of India’s Border Security Force (BSF) has called the killings of Bangladeshi nationals the border ‘unfortunate deaths’.
BSF Director General Rajni Kant Mishra insisted that the Indian border guards use non-lethal weapons and that the use of firearms is rare.
Mishra’s remarks came while replying to a journalist’s query at the end of the DG-level conference at Border Guard Bangladesh (BGB) headquarters in Dhaka on Saturday.
He insisted that the BSF has adopted a ‘non-lethal weapon policy’ and that their forces had been trained to maintain maximum restraint.
“Unfortunately, the situation sometimes turns ugly and our men are attacked with stones, sticks and sharp weapons,” he said. “In the rarest of rare cases, firearms are used [by BSF members] to protect themselves, not to target anyone.”
Border killings have been a contentious bilateral issue. Dhaka has repeatedly protested the deaths which continued to occur despite Delhi’s repeated assurances of curbing them.
At least 1,144 Bangladeshis were killed by BSF along the border between 2000 and 2018, according to data compiled by Odhikar, a human rights .
During the talks, Mishra said, the BGB chief expressed serious concerns over border deaths. “I assured him that instructions to observe utmost restraint will be reiterated to all field formations,” the BSF chief said.
The BSF chief said he had also requested to jointly identify vulnerable areas and do simultaneous coordinated patrolling.
BGB chief Major General Md Shafeenul Islam said apart from border killings, they also discussed smuggling of firearms, gold, drugs and fake currency.
“We came to a consensus that both the forces would refrain from crossing border of each-other. We’ve also decided to boost existing brotherly relation,” he said.
After the border talks, both sides agreed to undertake joint efforts to bring down the killings to zero by increasing coordinated patrols in areas vulnerable to cattle and drug smuggling, educating border population about the sanctity of International Border (IB) and preventing criminals from crossing the border.
They also agreed to take effective steps for preventing smuggling of firearms, ammunition, explosives, drugs, gold and fake notes. The agreed to pursue and share real-time information, including preliminary questioning report as applicable about the persons apprehended with smuggled items.
Highlighting the importance of Coordinated Border Management Plan (CBMP) in curbing trans-border crimes, both sides agreed for the implementation of CBMP in its positive spirit and take effective steps for prevention of human trafficking and illegal crossing.
Both the DGs agreed to cooperate with each other and maintain extreme vigilance at the border to prevent illegal cross-border movement.
Both sides agreed to declare new areas as ‘Crime-Free Zone’ in phases. The proposed area within Sarail Region/Tripura Frontier may be in the first phase.
The BGB delegation comprising 19 members, including members from Prime Minister’s Office, Home Ministry, Foreign Ministry, was led by its Major General Shafeenul Islam. A 10-member BSF delegation, including members from Home Ministry and Indian High in Dhaka, was led by Mishra.
The 48th Border Conference between BGB and BSF began on June 12 and ended on Saturday after signing of a Joint Record of Discussion. – UNB