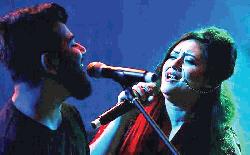 Culture Desk
The recent death of Madrasa student Nusrat Jahan Rafi has stirred the national conscience. Popular band of the country Chirkutt also could not help but do something to express their shock and grief at the grotesque incident. Thus on April 16, the band uploaded a new song titled ‘Manush’ about the struggle of Nusrat. It is available on the official YouTube page of Chirkutt. The intro of the song reads as-Not all Baishakh has colour. Had to sing for Nusrat.’ The song has been voiced, written and composed by Sumi of Chirkutt.
About the song Sumi said, “Murder, deaths are common incidents in out country. But this recent death has left a deep scar in us all. Thus we have decided to release this song in her memory.’ The song was originally intended for a film and it was prepared about ten months ago. The incident involving Nusrat prompted the band to make a new song. But they later realised that this song already in their unreleased store adequately matches the requirements. Thus they remade the video composition and released it. The song goes like this ‘Parla Doyal Parla, Ei Morarei Marla’. This translates as: ‘The Benefactor you could, you could Kill the one who was already dead.’ When she was faced with death Nusrat probably thought like this, Sumi speculates. She prayed that Nusrat would certainly find peace in the afterlife though this life has been full of hardship, brutality and unnaturalness.