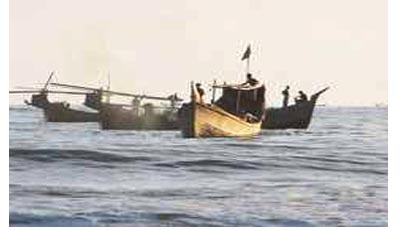 Dhaka, Sept 05 – Bangladesh has a huge potential for harvesting blue economy but still it is in the nascent stage because of the shortage of technical know-how, lack of policy and entrepreneurs to invest in this sector. “We are still not in a good position to tap the blue economy for the development of Bangladesh. We have shortage of manpower in this sector. Even we don’t have sufficient institutions to teach oceanography. Currently we have three universities like Dhaka University, Chattogram University and Noakhali University where oceanography is taught,” Real Admiral (retd) Md Khurshed Alam, secretary (maritime affairs unit), ministry of foreign affairs of Bangladesh said yesterday.
He came up with the statement in reply to a query at a press conference on the concluding event of two-day long of ‘Third Indian Ocean Rim Association (IORA) Blue Economy Ministerial conference’ at InterContinental Hotel in the capital. Dr Nomvuyo N. Nokwe, secretary general of IORA was also present on the occasion.
“The media should also play a vital role in promoting the benefits of blue economy so that people can know more about its importance and entrepreneurs feel like investing here,” Khurshed Alam said.
He said India, Sri Lanka and Myanmar are far ahead of Bangladesh in harvesting the resources of the blue economy.
He further said Bangladesh has undertaken two projects like using spiriluna to manufacturing shampoo and soap locally and to exports globally. Secondly, the project would be on oyster culture. Both the projects would be financed by IORA.
In reply to a query Dr Nomvuyo N. Nokwe said that IORA is giving more importance on the peace-building in the Indian Ocean as it is much more important for harvesting the blue economy.
“We want peace in this region of Indian Ocean. We don’t cater any aggression,” she added.
The two-day long IORA came up with Declaration with 17 principles in pursuit of promoting an inclusive Blue Economy through sustainable use of its opportunities for socio-economic development in the Indian Ocean Rim region.
As per the Declaration, Blue economy requires a balanced approach between conservation and development and utilisation of marine and coastal eco-system, all oceanic resources and services with a view to enhancing their value and generating decent employment, securing productive marine economy and healthy marine eco-systems.
Blue economy recognises that ocean economy is dependent on the health of coastal and marine ecosystem and IORA Member States need to consider the protection of these ecosystems.
IORA Member States recognise the Blue Economy as a mean to attain the sustainable development, taking into account advantages and strategies of managing the oceanic resources at regional and sub-regional levels.
IORA Member States need to consider ‘Marine Spatial Planning’ as a useful tool to carry out integrated and cross-sectoral planning at country level inter alia to develop marine value chains to meet demand for new and additional goals and services out of existing as well as emerging marine resources and industries.
IORA Member States will endeavor to prioritise Blue Economy with adequate focus on well-being and livelihood of people through engagements among countries and stakeholders on Blue Economy.
IORA Member States will align their legal, regulatory, and institutional framework and ocean management policies with sustainable development of the Blue Economy.
IORA Member States and Dialogue Partners will attach higher importance in entering into equitable, mutually beneficial collaboration inter alia to generate scientific knowledge and evidence.
IORA Member States, with Dialogue Partners will promote partnership(s) among and between stakeholders.
Member States are encouraged to consider the potential risks while exploring marine resources and minerals, particularly in the High Seas and ocean-beds.
IORA Member States will acknowledge importance and contribution of key global processes with regard to governance, observation, and assessment of oceans and seas within the UN System.
In the wake of growing marine pollution and ocean acidification, IORA Member States will address consequent impacts by supporting the advancement of ocean science in these areas.
IORA Member States will endeavor to establish an economic database for Blue Economy constituent blocks.
IORA Member States will prioritise engagement on various aspects of fisheries and aquaculture.
Being acutely aware of the growing threat of climate change to the planet, IORA Member States will strengthen cooperation to protect, conserve and preserve the marine environment.
IORA Member States, in collaboration with Dialogue Partners, will explore ways to deepen existing cooperation in areas such as aquaculture, hydrograph, seabed mineral exploration, etc.
IORA Member States will promote creation of robust ‘maritime domain awareness’ of Blue Economy among people at-large, communities and policymakers.
IORA Member States should underscore access to available, contemporary and critical data and knowledge from across the world by the developing countries, particularly by coastal and island developing states.
The First and Second ministerial blue economy conference were held in Mauritius on 2-3 September 2015 and Jakarta, Indonesia on 8-10 May 2017 respectively.
The next ministerial blue economy conference would be held in UAE in 2021 and Bangladesh will be the vice-chair of the event. IORA has a 21 member states.
The event also expressed concern about the emerging threats arising from human acts that are placinogoceanic biodiversity and marine resources into jeopardy such as over-exploitation of resources, ocean acidification, increase in marine plastics debris and nutrient pollution, illegal, unreported and unregulated fishing, over fishing, drug and human trafficking by sea, maritime crime and terrorism, illegal mining and impacts of global climate change. – Staff Reporter