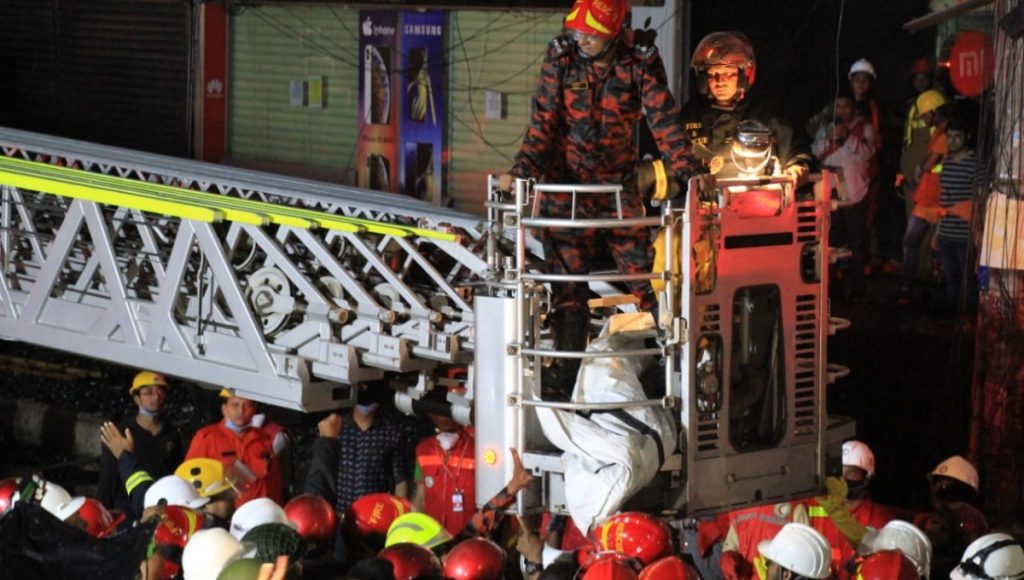 Dhaka, Mar 29 – It was impossible to see anything as there was a dark wall of smoke everywhere. Within 10 minutes the smoke spread throughout the building making it difficult for people to escape.
Exhausted and terrified, Hasina Parvin, Credit Control Manager of Aamra Networks Limited, housed on the 17th floor of the 22-storey Faruk Rupayan (FR) Tower in the capital’s Kemal Ataturk Avenue, said this while narrating her harrowing experience of Thursday’s devastating fire incident that left 25 people dead.
The 39-year-old mother of two daughters escaped the horrific fire that broke out on the 6th floor of the building around 12:45 pm.
“We were at a departmental meeting at that time. Suddenly, we saw through the window huge black smokes bellowing up and noticed a fire at our building.”
“Instantly, I along with other colleagues got out of the office and rushed to the staircase. We heard people screaming and saw smoke filling up the staircase,” she said.
“Just within 10 minutes, the smoke spread throughout the building and we reached the rooftop. Around 50 people, including me, managed to reach the rooftop. But a little later, it was impossible to stay there because of the smoke,” she said.
Parvin and some of her colleagues ran towards the rooftop as it was impossible to get down through the stairs due to the huge dark smoke. After reaching the rooftop, they jumped to the adjacent building, Ahmed Tower, and got down to the ground.
Parvin narrated she saw some people jumping off the building breaking open the windowpanes. “Too late to make it to the rooftop for an easier escape, they tried to escape through the windows of the building and some of them fell down.”
She also said people used two ways to escape — some tried to go to the rooftop while some others broke the windowpanes to get to Ahmed Tower.
“Till 1:00 pm, people were able to make it to the rooftop. But after that, the staircase becomes too hazy for people to make it through,” she said.
Parvin said there were 65 employees on their floor but four of those could not manage to escape. “Later, they were rescued by firefighters around 3:45 pm and taken to Apollo Hospital.”
She, however, said there was no emergency fire exit in the 22-storey building that houses dozens of offices. “I’ve been working in this building for around seven years and had the same experience during an earthquake several years back…many panicked people were injured while getting down,” she added.
Sushanta Roy, who is now undergoing treatment at Apollo Hospital, told UNB, “Thanks to the Almighty that I’m alive. When I got trapped on the 17th floor, I thought it’s over, I wouldn’t survive. We were unable to breathe properly due to suffocation and black smoke.”
“We broke open the glass wall and screamed for help. Once, I thought would jump off the building, but saw several people fell down while climbing down holding cables,” he said.
Later, the firefighters rescued me and put me down through the ladder, he added.
While visiting the spot in the morning, Housing and Public Works Minister SM Rezaul Karim said the FR Tower was built violating rules. “Permission was given only for an 18-storey building, but a 22-story building was constructed illegally.”
He said Rajuk approved the 18-storey FR Tower in 1996. “But, the building owner submitted the copy of 22-storey building design in 2005. After an investigation, it was found they summited an improper design without Rajuk’s approval. The building was constructed violating the (original) design.”
After Thursday’s fire, Rajuk formed a committee to investigate how the four additional floors were built and whether the building had fire-safety measures.
Built on an eight-Katha plot, each of its floors has 6,000 square feet of space for commercial purposes.
The building houses a restaurant, a coffee shop, a branch of state-run Pubali Bank, a buying house, a freight-forwarding company, and many other firms.
Meanwhile, firefighting units were carrying out their salvage operation for the second consecutive day on Friday. – UNB