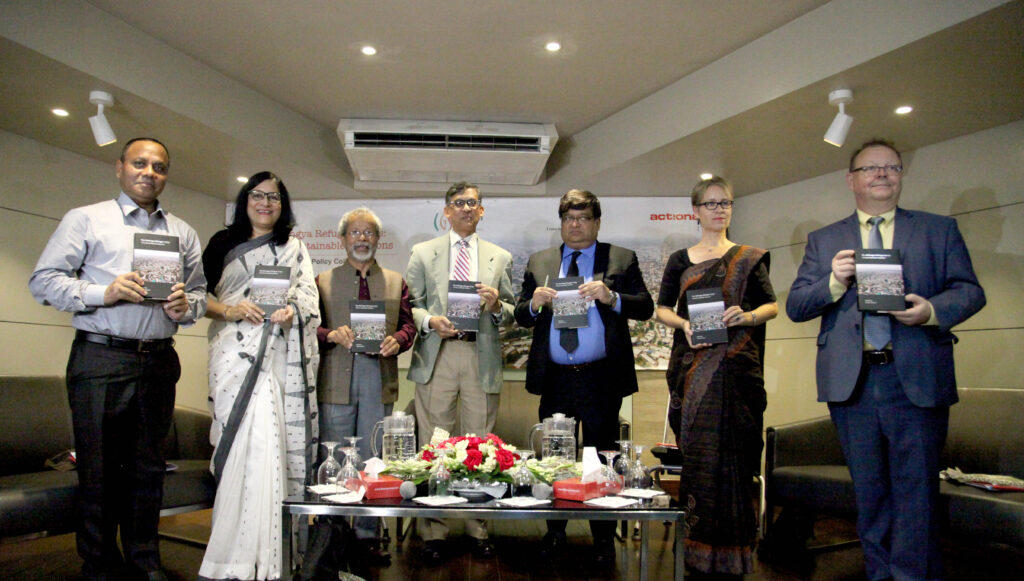 Dhaka  – Bangladesh needs to get engaged with three pocket countries of Myanmar — China, Japan and India — in a much more “creative way” to find a sustainable solution to Rohingya crisis, said an international affairs expert on Tuesday.“Myanmar thinks these three countries are in its pocket,” said Prof Imtiaz Ahmed, Director of Centre for Genocide Studies at Dhaka University, at a book launch programme.

He said a sustainable solution to the Rohingya crisis and their safe return to Rakhine State is possible if Myanmar does two things — amendments to the existing laws and creating a safe zone in Rakhine with deployment of security personnel from China, Japan and India along with the presence of Myanmar security forces.

He said it needs to be identified who are investing in Myanmar, who are signing new deals and doing lucrative businesses with Myanmar and flag them internationally drawing the attention of global rights bodies.

With this process, Prof Imtiaz said, the world will know who are doing businesses with a country which committed “genocide”.

He also sought initiatives to wake up cultural personalities, singers, poets and civil society members so that they can speak up in favour of Rohingyas.

The expert reiterated that Myanmar is not at all serious about Rohingya repatriation. “Myanmar is only staging a drama, so far.”

ActionAid Bangladesh, the Centre for Genocide Studies and the Centre for Peace and Justice jointly organised the book launch event and a policy colloquium titled ‘The Rohingya Refugee Crisis: Towards Sustainable Solutions’ at BRAC Centre Inn to discuss the multidimensional challenges and sustainable solutions.

Prof Imtiaz said there should be constant gaze on Myanmar and is ought to be done putting the pressure on them as they committed the genocide, not Bangladesh.

Canadian High Commissioner Préfontaine said they, like other countries, want to see justice for Rohingyas, which is very important.

Giving emphasis on accountability issues, the envoy said whoever is doing something wrong has to be held accountable.

Mahbub Uz Zaman laid emphasis on accountability and justice for the safe and dignified return of Rohingyas to their homeland.

He acknowledged slow progress on bilateral front as basic demands of the Rohingyas remain unaddressed from Myanmar’s side.

Mia Seppo reiterated their commitment to find a sustainable solution to the Rohingya crisis saying the UN can do little alone without collective political commitment and will from the international community.

The Rohingya crisis poses a myriad of challenges alongside humanitarian urgencies, according to ActionAid.

Two years on since the exodus, the crisis is now shifting from an emergency into a protracted mode with the needs and gaps evolving, it said.

Many factors are at play, including rising concerns for the needs of the host community, pressure on the domestic economy, issues of health, environment, security, diplomacy and the complexity of repatriation, making the crisis a multidimensional,  particularly a challenging one to resolve.

Despite all the preparations, no Rohingya turned up on August 22 to avail of the “voluntary” repatriation offer given to them to go back to their place of origin in Rakhine State of Myanmar prompting the authorities to suspend the repatriation process.

The first batch of Rohingyas was scheduled to return on November 15 last year but it was also halted amid the unwillingness of Rohingyas to go back for lack of a congenial environment in Rakhine.

More than 730,000 Rohingya fled and took shelter in Bangladesh to escape a vicious campaign of ethnic cleansing since August 25, 2017.

The two countries signed a repatriation deal on November 23, 2017, but there has been little progress.

On July 29, Bangladesh handed a fresh list of 25,000 Rohingyas from around 6,000 families to Myanmar for verification before their repatriation to Rakhine State.

With the latest list, Bangladesh has so far handed the names of around 55,000 Rohingyas to the Myanmar authorities and around 8,000 of them have been verified. Myanmar only cleared 3,450 Rohingyas for beginning the repatriation.

On January 16, 2018 Bangladesh and Myanmar inked a document on “Physical Arrangement”, which was supposed to facilitate the return of Rohingyas to their homeland.

The “Physical Arrangement” stipulates that the repatriation will be completed preferably within two years from the start.UNB