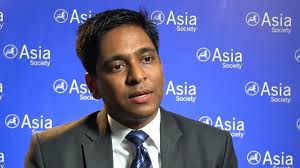 Ejaj Ahmad, founder and president of Bangladesh Youth Leadership Center (BYLC), the country’s first leadership institute, received the 2013 Rising Star Award from Harvard Kennedy School.The award giving ceremony was held at the John F Kennedy Forum of the University in Cambridge, Massachusetts on May 11.
The prestigious Rising Star Award recognises an alumna or alumnus who, ‘within six years of beginning his or her career, has stood out as a leader, a catalyst for change, or a person making a meaningful difference to individuals, organisations, or governments.’
Ejaj had received a Master in Public Policy from Harvard in 2008.
‘Your (Ejaj) work to mobilise the youth of Bangladesh by founding Bangladesh Youth Leadership Center (BYLC) is more than inspiring—it also speaks to the power that leadership training can have to unite and affect a generation of people,’ said Marty Linsky, a faculty of the School, before handing over the award to Ejaj.
“BYLC’s work with young people from all three educational systems (English, Bengali and Madrassa), its focus on home-grown leaders, and its service to more than 500 Bangladeshi youth speak volumes of your ability to catalyse change in individuals and organisations,” he added.
After examining materials from alumnus of the Kennedy School over the last six years, Harvard decided Ejaj’s work was especially deserving of recognition.
“We want to acknowledge what you’ve already accomplished in nurturing the seeds for a better Bangladesh, acting as a role model for all students and alums, and demonstrating that even individuals can create and move institutions that change the world,” Harvard further paid tribute to Ejaj.
The award was decided by the Harvard Kennedy School Alumni Board and the Office of Alumni Relations.
During his acceptance speech, Ejaj dedicated the award to the youth of Bangladesh ‘whose idealism and commitment to a prosperous Bangladesh give inspiration for the work that BYLC does.’
In his speech Ejaj further addressed the recent Savar tragedy in Bangladesh.
‘If only we could find a balance between our ambition and aspiration, if only we had a little less greed, and a little more compassion, a thousand lives would have been alive today,’ he said. ‘And this is what we teach at BYLC – so that young people can do well for themselves but also do well for others. To not just look up, but also to look down,’ he added.
His remarks were greeted with a standing ovation. banglanews24.com