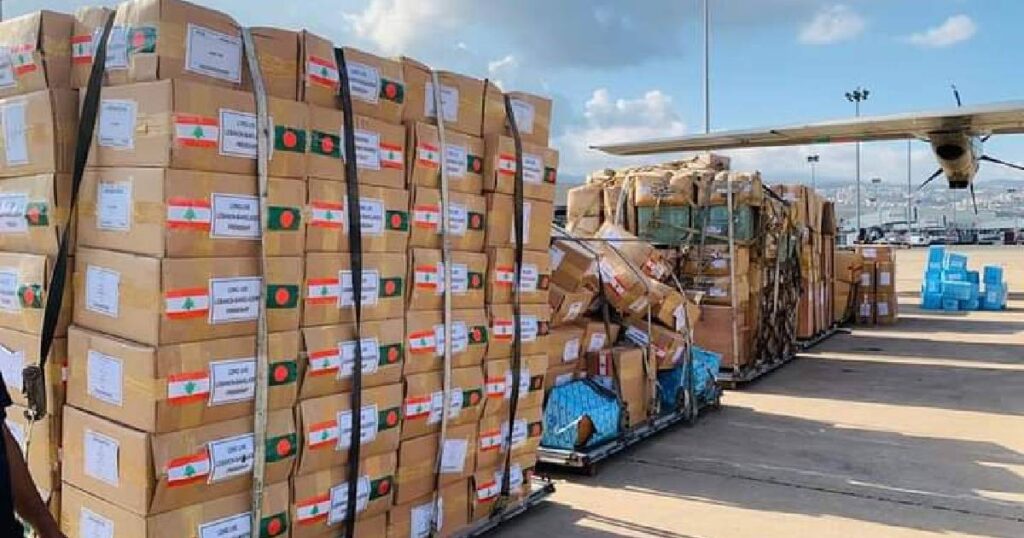 Dhaka, Aug 10 – Bangladesh has sent “emergency supplies” to Lebanon for the people of Beirut as a token of friendship who are trying to recover from the damage caused by the huge twin explosions. Bangladesh Airforce carried a C130 full of emergency supplies which reached Beirut on Monday.
It has been planned to bring back stranded Bangladeshi citizens by the same aircraft, State Minister for Foreign Affairs M Shahriar Alam tweeted on Monday.
The goodwill aid includes nine tonnes of food items, two tonnes of medicines and medical supplies, said the Ministry of Foreign Affairs.
The transport aircraft of Bangladesh Air Force carrying the goodwill aid; and four high level officers of Bangladesh Navy, an officer of Bangladesh Army and 12 crew member of Bangladesh Air Force reached Rafic Hariri International Airport, Beirut, Lebanon on Monday.
Ambassador of Bangladesh to Lebanon Major General Md. Jahangir Al Mustahidur Rahman handed over the goodwill aid to the nominated local representative of the Lebanese government.
The officials of Lebanese Defense Ministry, UNIFIL and Embassy officials were present.
During this difficult time in Lebanon, the government of Bangladesh sent the goodwill aid for the people of Lebanon on behalf of the people of Bangladesh.
Earlier, Foreign Minister Dr AK Abdul Momen said Bangladesh decided to send emergency food like rice, biscuits and other dry foods to Lebanon. “The aircraft will fully be loaded with dry foods.”
Foreign Minister Dr Momen talked to Lebanese Foreign Minister Charbel Wehbe on Wednesday and said Bangladesh stands ready to provide any emergency support to Lebanon.
He expressed gratitude to the government of Lebanon for providing necessary supports including treatment to Bangladeshis who got injured.
Five Bangladeshi nationals were killed and more than 100 including 21 members of Bangladesh Navy injured in the explosions.
The blast killed more than 160 people, injured more than 6,000 people and left more than 300,000 homeless.
Bangladesh Navy’s warship, BNS Bijoy which patrols Lebanese water territory under UNIFIL, was partially damaged.
The Embassy also urged all to inform it through its hotline number if they come to know of any more casualties.
Some 1,50,000 Bangladesh nationals work in a number of sectors in Lebanon.
Hospitals were overwhelmed — one that was damaged in the blast had to evacuate all its patients to a nearby field for treatment.
Buildings were damaged for miles around the city, and Beirut’s governor said Wednesday that hundreds of thousands might not be able to return to their homes for two or three months. – UNB