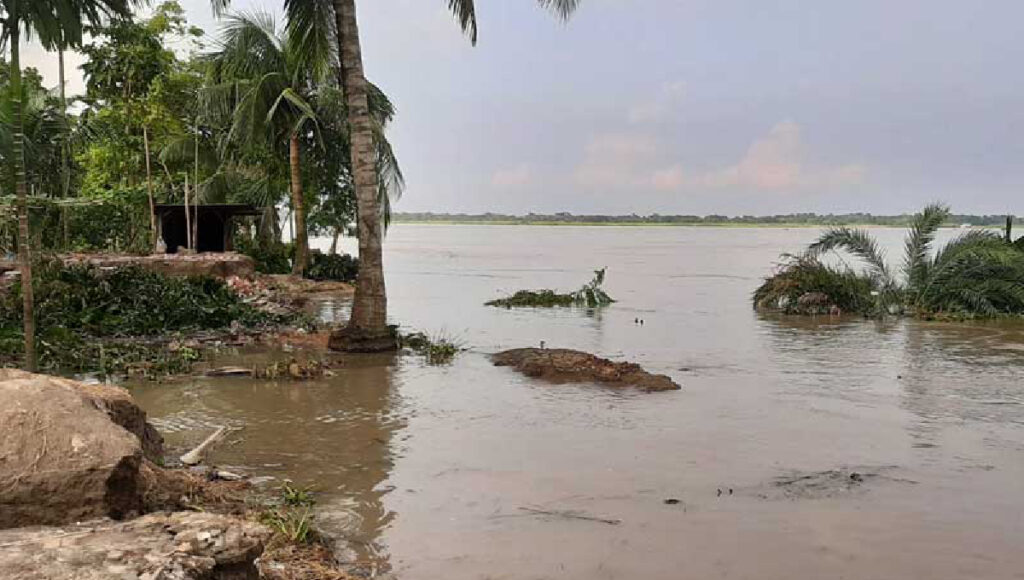 A sudden rise in the water level of Madhumati and Nabaganga rivers in recent days has intensified erosion along their banks at many places in  Narail , forcing people to look for safer paces.The erosion has taken a serious turn in Ghagha, Mollikpur, Shierbr, Makrail areas along Madhumati’s banks and at 15 points, including Kargati, Soto Kalia, and Suktogram, of Nabaganga banks.
India recently opened all the gates of Farakka Barrage following floods in Patna and 12 other districts, pushing up the water levels in Bangladesh rivers and flooding many areas.
Residents of the affected areas in Narail have accused the local Water Development Board (WDB) of its negligence as waters from the rivers poured into houses in Kalia upazila.
Last year, several thousand acres of land crumbled into the Nabaganga River. “I’ve never seen Nabaganga rise so much in the last 35 years. My house was destroyed in a matter of seconds,” said Ilias Ali, a resident of Sukragram.
Locals accused the administration of doing little to help them.
Many, who have lost their houses in river erosion, are living with their relatives but some, like Julmat Sheikh of Kalia upazila’s Noragati village, have been staying under the open sky with their families as they have nowhere to go.
According to the locals, the WDB has failed to prevent recurring erosion because of their lackadaisical attitude.
But Babra-Hachla Union Parishad Chairman Mojammel Hossain defended WDB, saying it took “prompt steps” during the natural calamity. “Hopefully, the situation will be brought under control soon,” he said.
The local contractors declined to operate the emergency work at the beginning of monsoon as WDB officials usually demand 10 percent bribe for such projects, alleged contractors.
WDB Executive Engineer Md Zulfikar Ali and the chairman have taken initiatives to dump geobags. Ali declined to the UNB correspondent when his comment was sought for this article.
Although erosion is a regular phenomenon here, there appears to be no long-term plan to tackle it. Temporary measures, such as throwing sand bags against crumbling land, are too little to prevent erosion.
Lack of concrete steps may force people like Tobarok Sheikh of Charpara village in Kalia upazila to lose everything.
“I’ve already lost 35 acres of land to erosion. I’m a destitute now,” he said adding, “I’ve nowhere to go if I lose my house. I don’t know what I’ll do, re[ports UNB from Narail. ”