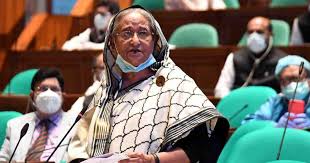 Dhaka, Feb 2 (UNB): Prime Minister Sheikh Hasina on Tuesday said she can pass a wonderful time during the parliament session as she is apparently confined in a ‘large prison’ due to the Coronavirus pandemic.
“I’m apparently confined in a big prison. I come and have a chance to meet everyone during the Parliament session. I’ve a really wonderful time,” she said winding up her valedictory speech in the 11th session of the 11th Parliament.
The 11th session of the current parliament, which began on January 18, was prorogued on Tuesday after 12-sittings.
Sheikh Hasina said she always prayed for the people of the country so that all could get rid of coronavirus.
She said the government has taken all sorts of measures to check the spread of coronavirus in Bangladesh and the country earned appreciation from across the world for its efforts.
“The whole world, including the UN Secretary General, has praised Bangladesh,” she said.
Sheikh Hasina, also the ruling Awami League chief, said the BNP misleads people by spreading rumours, telling lies and providing misinformation.
“They keep saying their words and we continue our works and serve the people. Let them speak in their way,” Hasina said.
Covid-19 vaccine: No serious side-effects
The prime minister said no serious side-effect of the Covid-19 vaccine has been reported so far.
“A few people felt pains in their hands. And a few others had light fever. And the number of such people is just four to five. We’re monitoring this,” she added.
Noting that the Covid-19 vaccine doses have already been sent to all districts, Hasina said the countrywide vaccination program will start there on February 7-8.
People need to get registered for the Covid-19 vaccination. “We’ve also given instructions to carry out antibody tests,” she said.
The Prime Minister said there was a lot of criticism and satires before the arrival of vaccine in Bangladesh. The vaccine itself has given answers to all of these (criticisms) after reached the country. It was a slap on the faces of those who had spoken against vaccine procurement.
Bangladesh is getting 30 million doses of Oxford-AstraZeneca coronavirus vaccine from the Serum Institute of India Pvt Ltd. Serum will supply five million doses each month between January and June this year.
The first consignment arrived in the last week of January.
Sheikh Hasina said the coronavirus situation has largely come under control and noted that the educational institutions would be reopened after the Covid-19 situation comes under control a bit further.
Bangladesh shut all educational institutions on March 17 last year after the country confirmed its first Covid-19 cases on March 8. The closure was extended several times, most recently until January 30 this year, to protect the students from the virus infections.
The government has again extended the closure, except the Qawmi madrasas, until February 14.
During this extended period, students will have to continue their study staying at home, Education Minister Dipu Moni said in a statement.