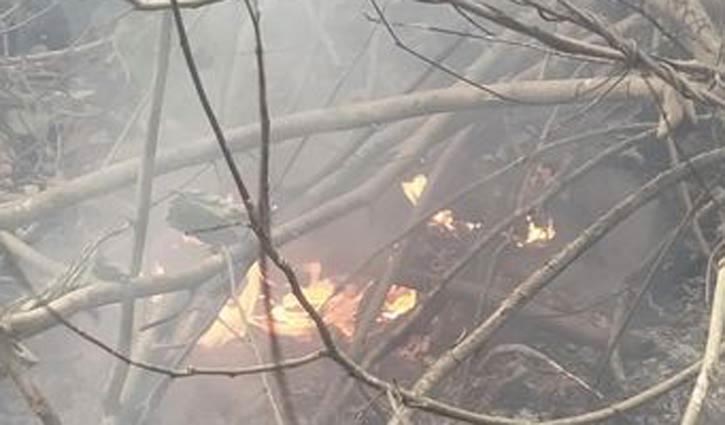 Bagherhat, May 5 :  A fire broke out again near Daser Bharani under Sharankhola Range of the Sundarbans East Forest Division on Wednesday, a day after another fire raged through the area on Tuesday .Residents of South Rajapur Char village noticed the fire and informed the Forest Department about the fire at around 7 am.
Forest Department and fire brigade members went to the spot at 10:30 am and sprayed water till 4pm to put out the blaze.
Sharankhola Fire Service Station officer-in-charge Abdus Sattar said, “We were able to put out the blaze in Daser Varani area of the Sundarbans after 2-day’s efforts. The fire broke out again in the same area on Wednesday.”
Fire fighters will again start spraying water in the area on Thursday morning.
Head of the investigation committee and Assistant Forest Conservator (ACF) of Sharankhola Range Md. Joynal Abedin said there was no reason to worry. The fire has been controlled by pouring water as there was a small fire and smoke.
“This fire will be completely doused if we spray water continuously”.
He said the investigation committee has already begun work to determine the cause of the fire and the extent of damages.
According to DFO Muhammad Belayet Hossain, the two-day fire burnt herbs of 1.31 acres of forest land in Das’s Varani area of the Sundarbans on Monday and Tuesday. There was no damage to large trees or wildlife.
The forest area is being monitored by the forest department constantly, he said.
A fire, which had raged through Daser Bharani under Sharankhola Range of the Sundarbans East Forest Division for nearly 24 hours since Monday morning, was finally brought under control on Wednesday.
The Forest Department formed a three-member probe body with Mohammad Joynal, the chief conservator of forest of the Sharankhola Range, as its head to probe the fire incident, reports UNB.