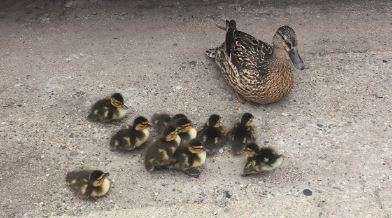 Littleton, Jun 22 (AP/UNB) — A flock of ducklings is safe in suburban Denver after a firefighter used a recording of duck calls to coax some of them from a storm drain.
A video from South Metro Fire Rescue shows how a firefighter was able to scoop out four of the birds in the water at the bottom of the drain on Thursday. Four others, though, were hiding in an adjacent pipe.
The firefighter held up his cellphone to an opening in the pipe and played a YouTube video of duck calls. The ducklings walked toward the sound.
The fire district says the ducklings were reunited with their mother, who was nearby.