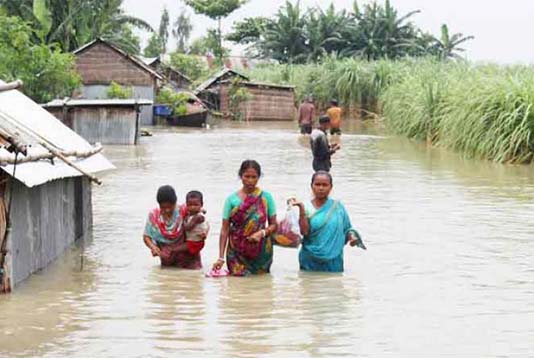 Rajshahi, Aug 11: Flood affected people have started returning back to their normal life as flood situation in the Ganges basin has further improved following continuous recession of water levels in most of its rivers for the last couple of days.Among the monitored 30 river points in Ganges basin at 9 am today, water levels of 20 stations have declined while went up at nine points and remained stable at one point in the past 24 hours ending 9 am today.
Apart from this, the rivers were flowing below the danger level at 28 points while above the danger mark at one point this morning.
“We are very much hopeful about substantial improvement of the flood situation in Rajshahi division as the heavy downpour and onrushing of flood water from the upstream hilly areas has reduced to a great extent,” Mukhlesur Rahman, superintending engineer of Bangladesh Water Development Board (BWDB), told BSS.
Local BWDB office has recorded a declining trend of water at all the four points of the Ganges River, while at many other points of its downstream Padma River this morning, said Mukhlesur Rahman.
The Ganges River was flowing 173 cm, 188 cm, 113 cm and 105 cm below the danger levels at Pankha, Rajshahi, Hardinge Bridge and Talbaria points respectively while the Padma River was flowing four cm above the danger mark with a four cm fall at Goalundo point, he added.
On the other hand, water level of the Korotoa River and the Jamuna River under the Brahmaputra Basin, which is flowing through Bogura and Sirajganj districts, were seen a falling trend at all five points of the two rivers this morning.
Arifuzzaman Bhuiyan, executive engineer of Flood Forecasting and Warning Centre (FFWC), said of the 16 river points both in Ganges and Brahmaputra Basins, being monitored in many districts under Rajshahi division regularly, water levels decreased at 15 points, while went up at one point this morning.
However, the rivers were flowing below the danger level at 15 points, while above danger mark at one point during the period.
Engineer Bhuiyan said a stable situation is expected within the next ten to 12 days as there is no possibility of any new flood situation during the current rainy season.
Additional Divisional Commissioner Moinul Islam said the local administration has recorded that around 8.93 lakh people of 2.14 lakh families and standing crops on around 34,140 hectares of land have been affected in the division.
He said the district and upazila administrations with the local public representatives have been distributing relief materials in the worst-affected areas for the last couple of weeks.
Around 2.14 lakh worst-affected people have, so far, received relief materials to overcome their livelihood related hardships caused by the flood in different districts under Rajshahi division.
The government, as part of its instant humanitarian support to cope with the disastrous situation, has disbursed 1,464 tonnes of rice, Taka 30.72 lakh in cash, 15,174 packets of dry-food, Taka 12 lakh for baby food and Taka 18 lakh for animal feed among the waterlogged people in the division.
Moinul Islam said 1,854 tonnes of rice, Taka 41.48 lakh, 5,026 packets of dry food, Taka six lakh for baby food and Taka 12 lakh for animal feed remained in stock for distribution among the affected people.
Apart from this, 1,000 tonnes of rice, Taka 20 lakh, Taka 15 lakh for baby food and Taka two lakh for dry food are available for the hardest hit families in Sirajganj district, if needed, he added.
Meanwhile, the Department of Health has undertaken all possible measures to prevent any outbreak of water-borne diseases among the marooned people in the affected areas amid recession of the floodwater.
Some 2,579 patients were recorded to be suffering from various water-related diseases and 16 deaths occurred mainly caused by drowning and snakebite, since July 1, sources said.