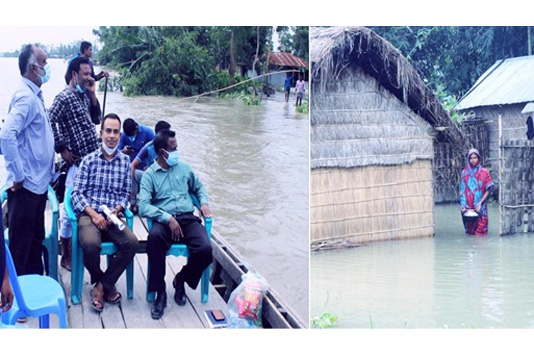 Rangpur, July 15: The flood situation deteriorated further Wednesday following inundation of fresh areas as major rivers, excepting Teesta, marked rise to flow above their danger marks (DM) at nine points in the Brahmaputra basin.Officials of Bangladesh Water Development Board (WDB) said the situation worsened in Kurigram, Gaibandha, Jamalpur, Bogra and Sirajganj while marked improvements in Rangpur, Nilphamari and Lalmonirhat during the past 24 hours till 9 am today.
The district administration sources said around six lakh people have been marooned by floodwaters in the low-lying and char areas along the riverbanks in these eight flood-affected northern districts.
Many flood-hit people have taken shelters at flood shelters, flood control embankments and educational institutions and the administrations have enhanced evacuation and relief activities in affected areas.
The Department of Agricultural Extension (DAE) sources said floodwater has submerged standing crops on 3,925 hectares of land afresh in flood-affected areas of Rangpur, Kurigram, Gaibandha, Nilphamari and Lalmonirhat districts alone.
Besides, standing crops have been inundated by floodwater in the flood-affected areas of Jamalpur, Bogura and Sirajganj districts.
“The Teesta marked a fall by 8cm at Dalia point in Nilphamari and was flowing below the DM by 33cm there at 9am today,” Executive Engineer of the Teesta Barrage Project (TBP) division of BWDB Rabiul Islam told BSS.
Similarly, the Teesta marked a sharp fall by 37cm at Kawnia point in Rangpur during the last 24 hours and was flowing 29cm below the DM there at 9am today.
According to BWDB sources, the Brahmaputra was flowing 96cm above the DM at Noonkhawa and 102cm at Chilmari and Dharla by 90cm at Kurigram and Ghagot by 90cm above the DM at Gaibandha at 9 am today.
The Jamuna was flowing 120cm above the DM at Fulchhari in Gaibandha, 125cm at Bahadurabad in Jamalpur, 115cm at Sariakandi in Bogura, 99cm at Kazipur and 71cm at Sirajganj at 9 am.
While visiting flood-affected areas in Gaibandha, Chief Engineer for Rangpur Zone of BWDB Jyoti Prosad Ghosh told BSS this afternoon over cell phone that riverbank protection works are continuing at vulnerable points in the zone.
“The water levels of the Teesta and Dharla might continue to recede in Rangpur, Lalmonirhat, Nilphamari and Kurigram while Brahmaputra and Jamuna to rise in the next 24 hours in the Brahmaputra basin,” he said.
“The flood control embankments and structures are remaining safe as officials of BWDB are working ceaselessly to protect those from any possible damages,” Ghosh added.
Additional Divisional Commissioner (General) Md. Zakir Hossain said district administrations have further intensified distribution of relief among the flood-hit people of Rangpur division.
District Relief and Rehabilitation Officer (DRRO) of Rangpur ATM Akhteruzzaman said distribution of 100 tonnes of rice, Taka four lakh 1,500 packets of dry foods and Taka two lakh for animal fodders continues among flood-hit people of the district.
Talking to BSS today, Gaibandha DRRO Mokhlesur Rahman said 1.30-lakh people of 32,500 families have been marooned in 26 unions of four upazilas of the district during the current deluge.
“Distribution of 210 tonnes of rice, Taka four lakh and 1,800 packets of dry foods allocated by the government continues among the flood-affected people in the district,” Rahman said.
Acting DRRO of Kurigram Abdul Hye Sarker said 1.62 lakh people of 40,640 families of 448 villages in 56 unions of all nine upazilas have been affected by the current flood in the district.
“We are distributing 170 tonnes of rice, Taka four lakh, 2,200 packets of dry foods, Taka two lakh each for baby foods and animal fodders among the flood-affected people of the district,” he added.