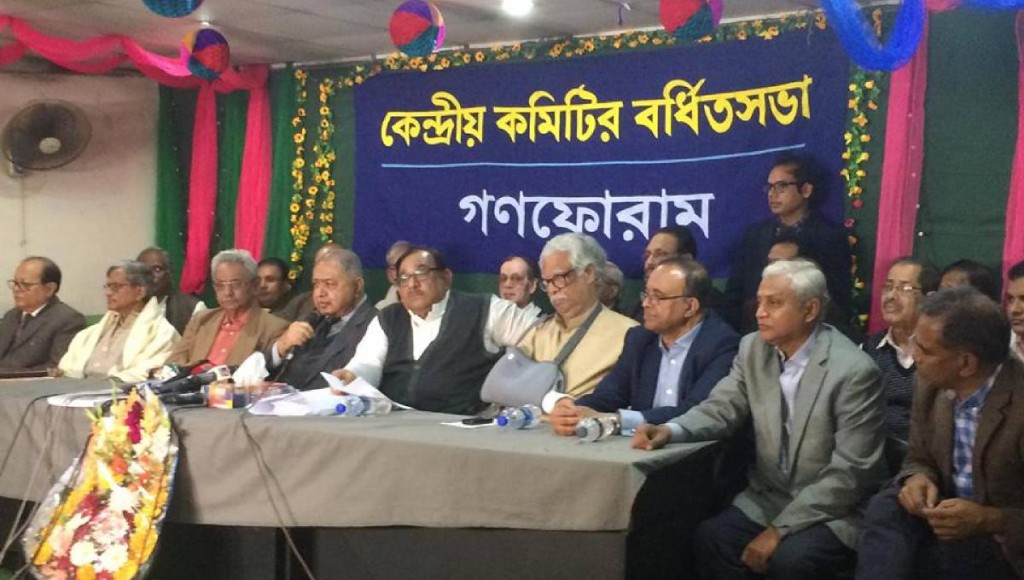 Gano Forum President Dr Kamal Hossain on Saturday said their party is thinking positively for sending its two newly elected MPs to the 11th Parliament.
“We’ve rejected the election, but the way our two candidates came out successful in such an election through competition is their big achievement. So, we’re thinking positively about sending them to Parliament,” he said.
Dr Kamal, also the leader of Jatiya Oikyafront, came up with the remarks at a press conference at Bangladesh Shishu Kalyan Parishad after an extended meeting of the party.
He thinks that it will not create any problem with its alliance partner BNP if their two elected MPs join parliament though BNP has already decided not to join it.
Dr Kamal said their two MPs can play a positive and meaningful role in parliament after taking oath. “If others (BNP MPs) think it won’t be possible for them to paly a good role in parliament they may take decision in their line of thinking.”
He, however, said the Jatiya Oikyafront will remain intact to create pressure on the government. “We’ve formed Oikyafront so that we can realise our demand for ensuring a free and fair election. We believe that if Oikyafront functions effectively we’ll be able to mount pressure on the government over the election and force it to discharge its duties obeying laws.”
The Gano Forum chief said their party is in favour of keeping the unity with BNP in principle and will take a positive decision in this regard after discussions.
Dr Kamal said Oikyafront has continued its movement and they may intensify it further in the days to come.Asked what will be his position about Jamaat’s presence in Oikyafront, the Gano Forum president said the Islamic party is with the BNP-led 20-partry, not with Oikyafront.
Replying to a question, Dr Kamal said they may move the court over the election if they get the evidence of serious allegation of vote frauds. “Normally, we shouldn’t file repeated cases over political issues. But we must consider filing cases if we get the grievous allegations.”
About the December-30 national election, he said the reports they got from their leaders across the country are very regrettable as a fair election was harmed in many ways.
He said a representative democracy is not ensured if people cannot freely and fairly exercise their right to franchise. “The way the election was held it was an onslaught on constitution. People can enjoy their ownership of the country if they can properly cast their votes.”
Dr Kamal also said a constitutional crisis is created when voting process is hampered and electoral laws are defied. “As per the reports we’re getting, the government is violating the constitutional rules one after another. We’re worried about a constitutional crisis as the government disobeying the constitution. A question may also arise whether it’s an elected government.”
Earlier in a written speech, Gano Forum executive president Mostafa Mohsin Montu said the neutral election process was made dysfunctional by stuffing ‘70-80 percent’ ballots at most polling stations the night before the voting.
“No one of them is elected whom the Election Commission announced elected through a farcical election on December 30. No one of the MPs who have been included in the Election Commission’s gazette is a public representative. We’ve already turned down the election with hatred. We strongly demand an immediate election under a non-party neutral government and a neutral Election Commission,” he said.
Otherwise, Montu said, they will restore the ‘lost’ democracy through a democratic movement together with people.“An impartial election, functional democracy and the rule of law will surely be ensured soon in Bangladesh if people remain united,” he added.