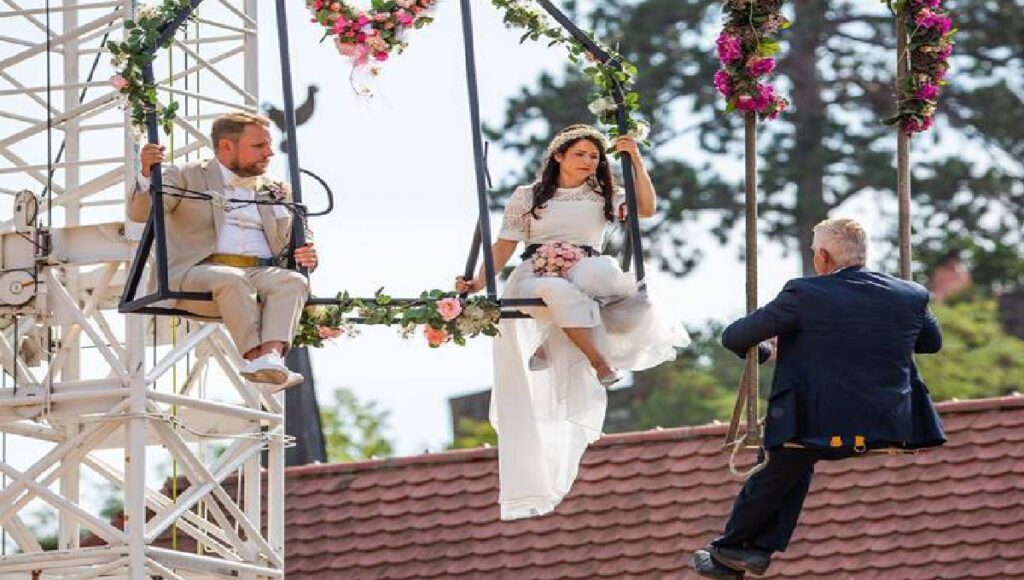 Everyone dreams of a unique wedding to make their D-Day a memorable one. But German aerial artist Anna Traber took things to a whole new level after she tied the knot with her partner Sven Lier at a ceremony, literally hanging in the air! he usual venues like a church or a pristine beach or a scenic park were replaced with a crowded market area with curious onlookers snapping pictures of the unusual scene, reports The Indian Express
For her special day, the 33-year-old bride and groom were both suspended from a tightrope sitting together on a flower-covered swing. Even the registrar was lifted off the ground for more than 20 feet in the air. Yes, seated on a trapeze opposite the couple, the ritual was quite high on energy.
The one-of-a-kind ceremony began when father-of-the-bride Johann Traber, drove the duo over the thin cable on a motorcycle! And the registrar, Breisach’s mayor Oliver Rein (CDU) was driven by the bride’s brother Falko Traber on the tightrope on a motorbike as well, BiLD reported.
The wedding took place on a sunny Saturday afternoon in the market square of her hometown Breisach near Freiburg and drew a big crowd. Later, photos of the ceremony went viral online, reports UNB.