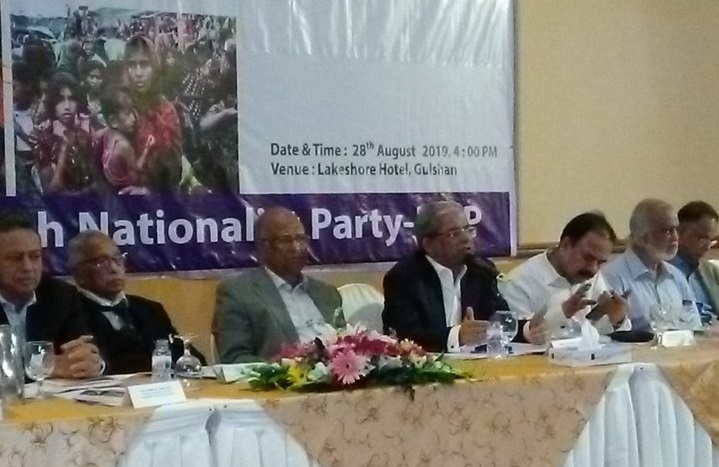 Dhaka, Aug 28 – Urging all the friendly countries of Bangladesh to come forward to help it have a permanent solution to the Rohingya crisis, BNP on Wednesday placed a 10-point recommendation, including forging the national unity, to solve the protracted problem. The recommendations were placed at a roundtable conference on Rohingya issue titled ‘The Plight of Rohingya and the Role of Bangladesh’ at a city hotel.
“The government must treat it as a national crisis and convene a national dialogue for national unity to reach a national consensus,” said BNP Standing Committee Member Amir Khasru Mahmud Chowdhury while reading out the recommendations from the keynote paper.
The recommendations include brining all the friendly countries of Bangladesh, who are yet to be on Bangladesh side, onboard to mount pressure on Myanmar; making the UN oversees the repatriation and the post-repatriation situation in Myanmar, assisting any possible trial proceeding against the perpetrators of Rohingya genocide and crimes against humanity, and playing a smarter and strategic role by the government in pursuing its global diplomacy through intense diplomatic interactions with the world powers.
“BNP would like to call upon all our friendly countries to support Bangladesh for a permanent solution to the Rohingya crisis,” said Amir Khasru.
Addressing the roundtable, BNP Secretary General Mirza Fakhrul Islam Alamgir said the present government has utterly failed to address the Rohingya crisis.
“Rohingya influx has turned into an acute and prolonged crisis for Bangladesh. It’s not possible for Bangladesh alone to resolve the crisis,” he said.
The BNP secretary-general said, “The government has utterly failed to address the situation.”
Noting that the Rohingya crisis cannot be solved without national unity, he said the current government is now being trapped by Myanmar.
BNP leaders and the foreign diplomats stationed in Dhaka representing India, the United Kingdom, the United States, China, Canada, Turkey, Japan, Norway, Australia, Pakistan and other countries joined the event.
Among the BNP senior leaders, Dr Khandaker Mosharraf Hossain, Dr Abdul Moyeen Khan, Reaz Rahman and Mofazzal Karim spoke on the occasion. – UNB