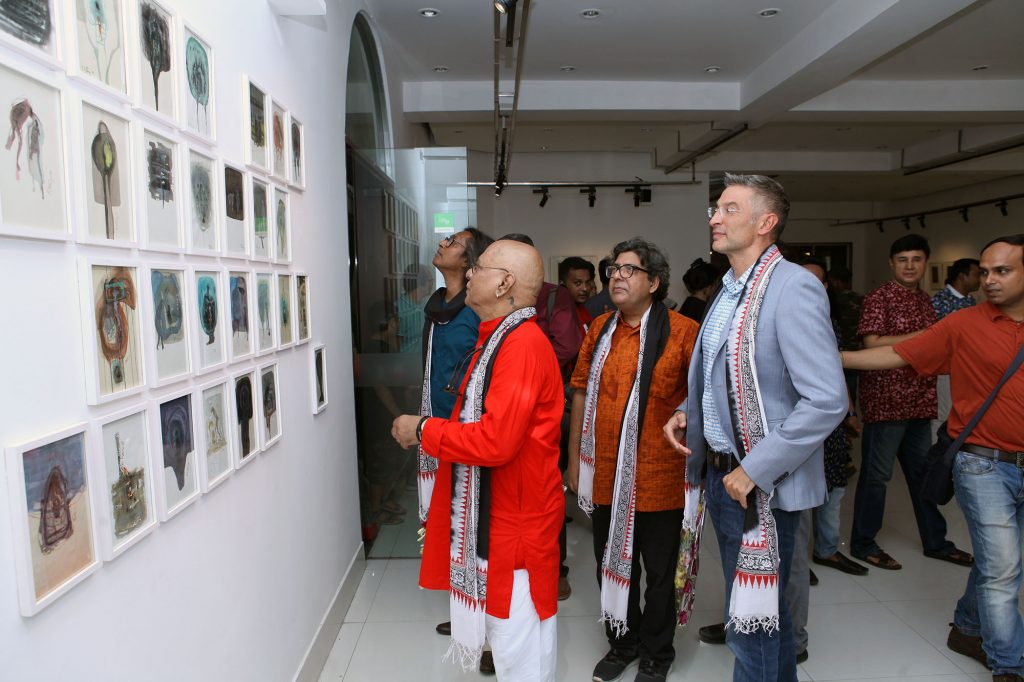 The first solo art exhibition by Iqbal Bahar Chy ‘Grits and Grains’ has begun at La Galerie, Alliance Française de Dhaka on Friday, 14 June 2019.
Eminent artist Shahid Kabir opening ceremony as the chief guest while Architect Salauddin Ahmed also the special guest. There are around 60 artworks are display for the exhibition.
Born in 1986 in Cox’s Bazar, Iqbal Bahar Chy earned his BFA and MFA from University of Development Alternative (UODA). He has received several accolades including ‘Kibria Young Printmaker Award 2018’ and the Golden Award in ‘Freedom of Thoughts: Bangladesh-Japan Contemporary Art Festival 2013’ by Bangladesh Shilpakala Academy. Chy has also participated in a number of group exhibitions in home and abroad including Beijing International Art Biennale in 2015 and 2017, Taiwan Print Biennale in 2018, and Asian Art Biennale in 2014 and 2018.
About the Exhibition: Iqbal Bahar Chy creates his prints imbuing them with a unique vision. His wood intaglio expresses a rather other-worldly landscape which he thinks stems from a juxtaposition of external as well as internalized experiences and thoughts. Through an elaborate process, he creates a saturated depiction of the environment and then scribbles using certain starting points of his thought, finally rendering a blend of reality and unreality into subtle shapes of symbolism and expression.
He seeks to develop a matrix of his surfaces by way of the nuances of his understanding of nature and art. His medium, printmaking itself is a remarkable process where instinctual dexterity and visual the process and lead him to the end.
The exhibition will be open to all till Saturday, 29 June 2019. – AFD press release