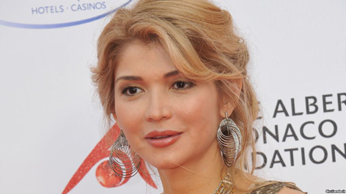 Gulnara Karimova, the once-powerful daughter of late Uzbek ex-President Islam Karimov, has been in detention since a corruption conviction in 2015, officials have confirmed.
Ms Karimova, 45, was tipped to succeed her father, who died last year, until she fell out with her family in 2014.
The prosecutor-general’s office said “a five-year restriction of liberty order” was imposed nearly two years ago.

It is thought she has been under house arrest. Her whereabouts are unknown.
Once the country’s ambassador to Spain, Gulnara Karimova’s name became the international face of Uzbekistan, running significant business interests, including a fashion label and jewellery collection, and recording pop videos.
But she became embroiled in bribery and money-laundering investigations.
The prosecutor-general’s office has now detailed two corruption cases against her, concerning assets of around $1bn (£760m) belonging to her in 12 countries, including the UK, Russia, Malta and United Arab Emirates.
It said the restriction of liberty order was imposed when she was found guilty in one case. A second is ongoing.
Ms Karimova was also being investigated for fraud, money laundering and concealing foreign currency, it said, adding that officials were looking to freeze her assets.
In an interview with the BBC in December, her son denied reports suggesting his mother had died, and accused the Uzbek security services of keeping her in isolation.
Islam Karimov Jr, who lives in London, urged officials to make her whereabouts public, but no details were given. -BBC