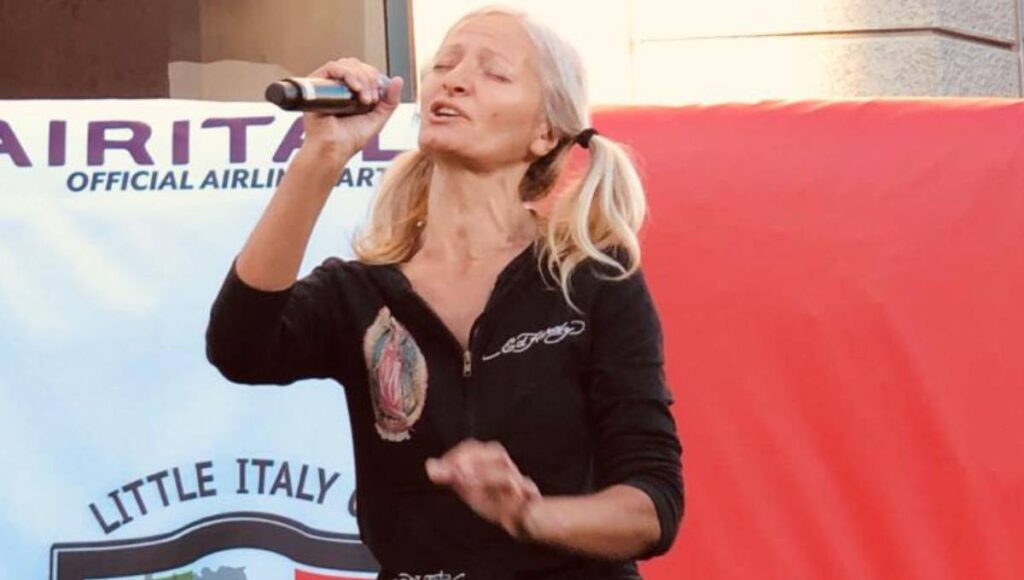 Los Angeles – The crowd cheered as Emily Zamourka took the stage.”I didn’t have much time to practice,” she confided in an audience gathered to celebrate the designation of Los Angeles’ new Little Italy on Saturday. “So I’m just gonna sing the same song I sang on the subway…That ok with you?”

Emily Zamourka performs in Los Angeles Saturday after being discovered singing at a subway station in a video that went viral.

It was her first performance since being dubbed the “Subway Soprano” after a video of her singing in a subway station went viral online.

It’s also her first time ever singing on a stage and performing in front of an audience.

Los Angeles Councilmember Joe Buscaino invited her to perform, introduced her on stage as “America’s new sweetheart,” and took care of her $700 fee.

“I don’t even know what’s happening,” Zamourka told a throng of reporters from around the world after her debut performance. “It’s so much. So fast.”

Grammy-nominated music producer Joel Diamond offered the 52-year-old Zamourka a recording contract. “Emily’s story is what dreams are made of,” Diamond told CNN. “And I never turn my back on a dream.”

It’s a dream because just two weeks ago, Zamourka was one of the nearly 60,000 people sleeping on the streets of Los Angeles. She was homeless. Had been for two or three years.

Then one chance meeting changed her life. Zamourka had taken the wrong train one day late last month.

She was feeling low and got off at the near-deserted Wilshire-Normandie Metro station. “I was just thinking, ‘Oh, I’m gonna sing a little bit, maybe that’ll make me feel better,'” she told CNN. “And I see this police officer walking towards me from a distance and it kind of hesitated me because, you know how they are. They don’t really want you to make any nuisance! And opera is loud!”

But that officer loved what he heard and asked her to sing some more while he filmed her on his phone. “And the train comes, and he pops in the train,” said Zamourka.

The Los Angeles Police Department posted the video and more than a million people saw it. The race was on to find the anonymous woman who became known as “The Subway Soprano.”

Zamourka reunited Wednesday with that officer for a hug and a thank you.

A trained violinist, Zamourka moved to the US from Russia in her early 20s. She said she was granted political asylum.

Zamourka took to singing on the subway a couple of years ago. She said she did it to earn money, to salve her soul and just to be heard. Her voice, she said, is “the only thing I got left.” She always sang on the subway because of the way it sounded. “It’s a different sound. It’s acoustic.”

A GoFundMe campaign has raised more than $60,000 to help Zamourka and a homeless charity in Los Angeles, the Downtown Women’s Center, offered to help find her housing.

“From the bottom of my heart I just wanted to thank everyone for what they’re doing,” she said. “And what they’re trying still to do.”

Zamourka now wants to perform and build a career as a musical artist. “It is the biggest ever…” she said, groping for words. “What’s the opposite word for tragedy?”

But most of all, she wants a home. “I wish that I just could have this kind of place,” she told us. “And it would be for a long time. And my own.”UNB