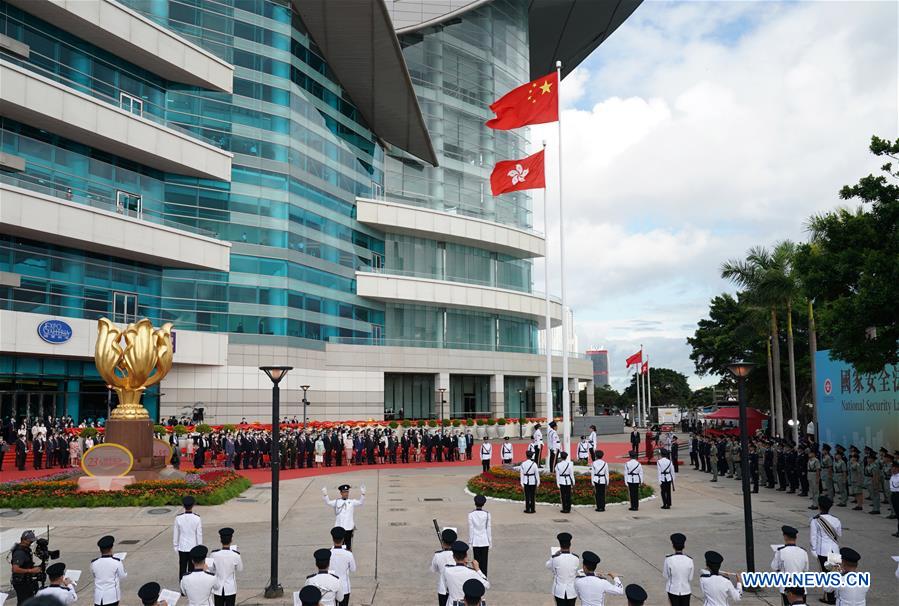 HONG KONG, July 1 (Xinhua) — China’s Hong Kong celebrated Wednesday the 23rd anniversary of its return to the motherland, after a law on safeguarding national security in Hong Kong came into force Tuesday night. China’s national flag and the flag of the Hong Kong Special Administrative Region (HKSAR) were hoisted and the national anthem was played at a ceremony at the Golden Bauhinia Square in Hong Kong Island at about 8:00 a.m. local time Wednesday in celebration of the anniversary.
Helicopters flew over Victoria Harbor, displaying the national and regional flags, and a fireboat sprayed a water-column salute.
At a reception following the flag-raising ceremony, Chief Executive of the HKSAR Carrie Lam stressed the significance of the return anniversary and said the new national security law will help restore stability in the HKSAR.
The Law of the People’s Republic of China on Safeguarding National Security in the HKSAR was passed unanimously on Tuesday at a meeting of the Standing Committee of the National People’s Congress (NPC), China’s top legislature, and took effect at 11:00 p.m. local time the same day upon its promulgation by the HKSAR government in the gazette.
The legislation came as Hong Kong had been gripped by prolonged social disturbances since June of last year. Intensified violent incidents and riots trampled order and the rule of law, threatened people’s safety, and endangered national security.
Lam called the enactment of the law a turning point to take Hong Kong out of the current impasse and restore stability and order from the chaos.
The HKSAR government will do its utmost and remain steadfast in its duties to fulfil the primary responsibility of implementing the law in Hong Kong, Lam said, saying a committee on safeguarding national security in the HKSAR will be established.
A series of celebrations were held on Wednesday for the anniversary, including parades of floats and fishing vessels and residents singing the national anthem in chorus.
At the opening ceremony of celebrating activities, Luo Huining, director of the Liaison Office of the Central People’s Government in the HKSAR, highlighted the successful practice of “one country, two systems” in Hong Kong over the past 23 years.
The social unrest arising from the now-withdrawn ordinance amendments concerning fugitive transfers since last year has exposed the tremendous risks Hong Kong is facing in safeguarding national security and posed a grave challenge to “one country, two systems,” Luo said.
“With the elapse of time, we will get a good view that the promulgation of the law marks a significant turning point for Hong Kong to move from turmoil to stability, and a major milestone for the practice of ‘one country, two systems’ in Hong Kong,” he said.
Celebrations can be spotted across Hong Kong. Residents sang the national anthem in the chorus at multiple landmarks, including Victoria Peak and the Hong Kong Observation Wheel.
In Victoria Harbor, 150 fishing vessels, decorated with the national flag and banners, sailed in a procession to celebrate the anniversary and the passage of the new law, which were warmly greeted by joyful Hong Kong residents on the harbour front.
The captain of the pilot boat surnamed Leung participated in every parade since 1997. The man, 68, said the lives of fishermen have become better and better since Hong Kong’s return to the motherland. “Only when our country is prosperous, can Hong Kong be prosperous,” he said.
Cally Kwong, an NPC deputy from the HKSAR, participated in the parade of floats and said she felt “very special” today as the new law took effect.
The law came at the right timing as after a turbulent year, Hong Kong residents long for a peaceful life, she said, stressing that the legal mechanism on safeguarding national security will guarantee Hong Kong’s future.
“Hong Kong is our home and we must cherish our home,” she said.