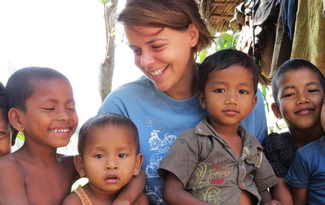 In June 2012 a young British architect set sail for Bangladesh, working in collaboration with Engineers Without Borders (EWB-UK) for a local organization – Simple Action For the Environment (SAFE).Bordered by India, Myanmar and the Bay of Bengal, Bangladesh is one of the world’s most densely populated countries. The low-lying nature of the terrain (with a large percentage of the land less than 12m above sea level) means that Bangladesh is vulnerable to flooding and cyclones and is now widely recognized as one of the countries at greatest risk from climate change. A recent report by the Intergovernmental Panel on Climate Change (IPCC) states that a 1m rise in sea level will engulf approximately 13% of the landmass in the southern belt displacing 15-20 million people by 2050.
Six major floods were recorded in the 19th century, with figures rising to 18 in the 20th century. For example, in 2004, the monsoon arrived early, adding to the heavy rainfall already experienced since June of that year. River levels continued to rise and on July 8th widespread flooding resulted.
“41 out of 64 districts were affected engulfing two-thirds of the country and affecting more than 25 million of its 130 million people.” – WATERAID: ”During the storm, around 1.5 million homes were ripped apart, nearly 750,000 acres of crops were destroyed and over 1.5 million farm animals were killed. There was also huge damage to fishing boats and materials, and drinking water was contaminated” – BRITISH RED CROSS: More recently in 2007, Cyclone Sidr hit Bangladesh and in turn triggered a tidal wave, which struck the coastline resulting in over 3,300 deaths, injuring approximately 34,500 individuals and forcing the evacuation of nearly one million. In terms of infrastructure and livelihoods the devastation was extensive. Nearly half the population of Bangladesh is living on less than $1 a day. With the ever-present threat of natural disasters, improved shelter construction techniques based on successful existing practices is just one of the many aspects to encourage community self-reliance rather than dependence on aid.
Jo Ashbridge, educated at the University of Bath and the University of Cambridge in the United Kingdom, left the comfort of hot running water and Cadburys Dairy Milk chocolate to relocate to Bangladesh, following her passion for sustainable and environmental architecture. Keen to learn about local practices and the use of unique materials including earth and bamboo, she began her journey in Dinajpur, a village in northwest Bangladesh.
Following her work with EWB-UK she was awarded the RIBA Boyd Auger Scholarship to investigate the role of earthen architecture within low-income communities at risk of flooding.
As I type this post, she is coming to the end of her yearlong project. The compressed stabilized earth blocks (CSEBs) are being laid for a prototype house, the doors and windows carved from ‘ampata’ by local carpenters and treated bamboo waiting to be cleaned, split, notched and nailed. There is a buzz of excitement in the village, which can almost definitely be felt all the way in New York City (Concentrate hard. Yep that buzz. Nope, it’s not the subway running underfoot. Promise).
(Beth Ashbridge in World, Asia)