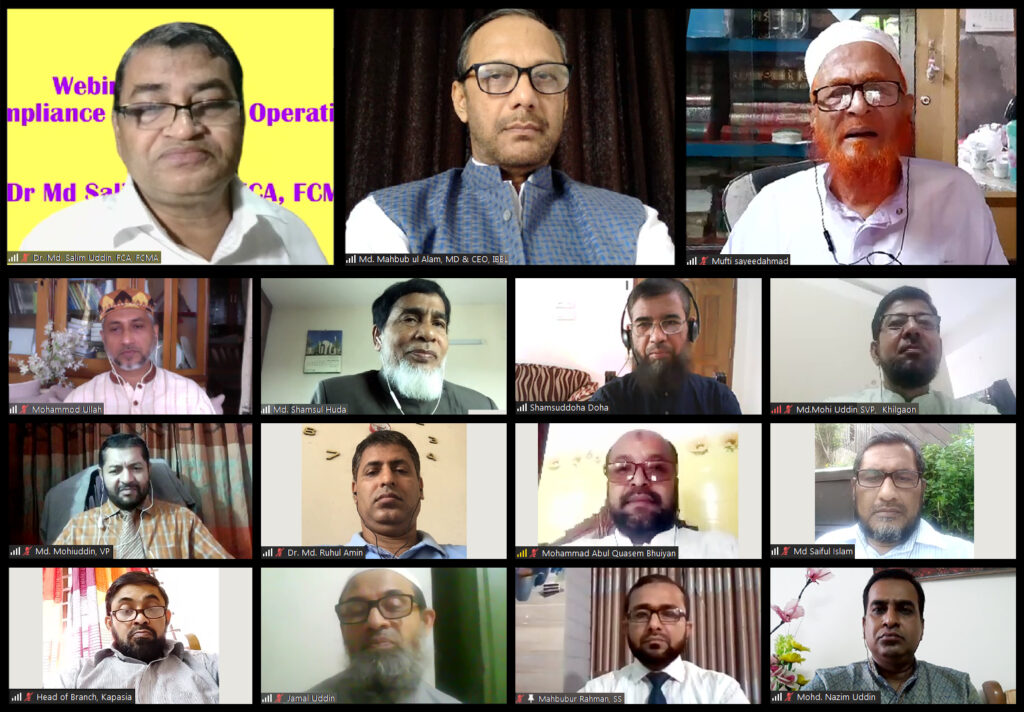 Dhaka East Zone of Islami Bank Bangladesh Limited organized a webinar on Compliance of Shari`ah in Banking Sector on 12 September 2020, Saturday.
Professor Dr. Md. Salim Uddin, FCA, FCMA, Chairman, executive committee of the bank addressed the program as the chief guest. Md. Mahbub ul Alam, Managing Director &amp; CEO of the bank addressed the program as the special guest. Mufti Sayeed Ahmed, Vice Chairman of IBBL Shari`ah Supervisory Committee addressed the webinar as chief discussant. Mohammod Ullah, Head of Dhaka East Zone presided over the program while Md. Shamsul Huda and Md. Shamsuddoha, Executive Vice Presidents of the bank addressed the program. Head of branches, executives and officials under Dhaka East Zone attended the webinar.
Professor Dr. Md. Salim Uddin, FCA, FCMA said that Islamic Banking is a successful reality of the world. Islamic banking is providing modern financial services with latest technologies at present. He said, 25 percent banking of Bangladesh is being conducted under Islamic banking financial system. Referring to the implementation of Shari`ah principles, he said that in order to implement Shari`ah banking, all the executives, clients and stakeholders of the organization needs to nurture social and human values, welfare, sincerity, devotion, transparency, accountability and compliance in the personal and professional life.
He said, Islamic banking is governed by both Shari`ah principles and traditional rules and regulations. Adherence to Shari`ah principles is not a priority of Islamic banking but a compulsory one, he added. He recalled, Islamic banking values compliance in all areas. He suggested to all concerned to be more vigilant in enforcing proper Shari`ah in banking activities.
Md. Mahbub ul Alam said that Islamic banking is a universal banking system without compromising with the principles of Shari`ah. It has been recognized as a successful model, he added. Islamic banking system has already been able to create a brand image of accepting Halal and banning Haram. He said Shari`ah policy is essential in the Islamic banking system.
Due to the people’s trust and love for the principles of Shari`ah, the system has become a model in the banking industry. – Press release