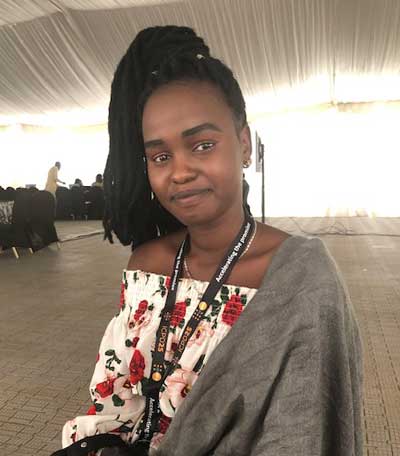 Nairobi, Nov 16 – “Child marriages must end and I am here at the Nairobi Summit to tell the world that it is wrong and must be stopped”The brave young woman, the 18 year-old refugee Priscilla Nyamal from South Sudan travelled hundreds of kilometres from a refugee camp in Northern Kenya to tell ICPD25 how she was shunned, kicked out of her home because she refused to be married off at the age of 14. Four years later, Priscilla who has been living at Kakuma refugee Camp has become a powerful voice against child marriages.
– Young women and girls are still subjected to a range of harmful practices and violence, including early child marriage.
– It’s estimated that every year, an estimated 12 million girls get married before the age of 18.
– In Kenya, 23% of girls are married before their 18th Birthday and according to UNICEF, the country has the 20th highest absolute number of child brides— 527 000
Priscilla Nyamal refused to be a Statistic and her story shows that societal change can happen if you speak out.
More than 6 000 delegates in the population development sector gathered in the Kenyan capital of Nairobi this week to renew a promise made to girls and women 25 years ago in Cairo. Some of the critical commitments included Ending Child Marriages, bringing preventable maternal deaths and gender based violence and harmful practices, as well as unmet needs for family planning to ZERO
Amina J.Mohammed, Deputy SG of the United Nations said: ‘We stand in solidarity with the women who die young giving life, with girls forced into child marriage, with girls whose genitals are cut and with 1 in 5 women/girls who are assaulted/lost their lives at the hands of a partner/family member each year. It’s time to KEEP the PROMISE’.
The UNFPA Executive Director, Natalia Kanem told the media at the final press briefing: The Nairobi Summit represents a renewed, re-energized vision and community working together to act and deliver. ’ Together we will make the next 10 years a decade of action and results for women and girls, keeping their rights and choices at the centre of everything’.
A promise that Pricilla Nyamal hopes world leaders will keep. – IPS