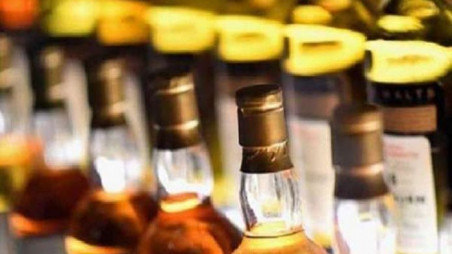 Dhaka, Feb 2 : Six suspects were arrested in Dhaka’s Bhatara and Tejgaon on Monday night for the production and sale of illegally distilled liquor.
The arrestees were identified as Montush Chandra Adhikary alias Akash, 35, Redwan Ullah, 35, Sagar Bapari, 27, Nasir Ahmed alias Ruhul, 48, Sayed Al Amin,30, and Md Jahangir Alam, 45.
“Gulshan zone team of Detective Branch (DB) conducted simultaneous drives at Tejgaon and Bhatara areas from 8:45pm on Monday night following reports of deaths caused by consumption of liquor in different parts of the city,” said Walid Hossain, deputy commissioner (media) of Dhaka Metropolitan Police.
Six deaths have been reported over the last few days – three in Bhatara Police Station area, one in Cantonment Police Station area and two in Mohammadpur Police Station area – attributed to drinking alcohol. Cases were filed with the concerned police stations in connection with the deaths.
DB (Gulshan division) started shadow investigation along with local thana police.
During investigation, DB scrutinised CCTV footage, obtained from the Cantonment Police Station area, where it showed two persons coming on a motorcycle and giving a bottle of liquor to the victim. The man died after consuming it.
Detectives later identified the two men. Mantosh, Reduan and Sagar were arrested from in front of Yantun Chinese Restaurant in Tejgaon at 8:45pm on Monday.
Based on information provided by them, DB raided a house in Khilbarirtek area where they discovered an illegal liquor factory and arrested the owner Nasir, manager Al Amin and worker Jahangir. A large quantity of counterfeit foreign liquor, empty liquor bottles, cork, stickers, spirits, synthetic dyes and other materials were recovered from the adulterated liquor factory.
During preliminary interrogation, it was known that Nasir used to make and sell adulterated liquor. In recent times, there has been a crisis in the market due to restrictions on the purchase and sale of liquor from warehouses.
Taking advantage of the situation, they set up a factory to make adulterated liquor. They collected spirits, stickers and paints from the vicinity of Mitford Hospital. Then they used them to make adulterated liquor which was sold to various retailers and wholesalers by other members of the group.
During investigation, it was also unearthed that the five people of Mohammadpur and Bhatara died due to drinking adulterated liquor made in the factory of Nasir.
A case has been filed against those arrested at Bhatara Police Station, reports UNB.