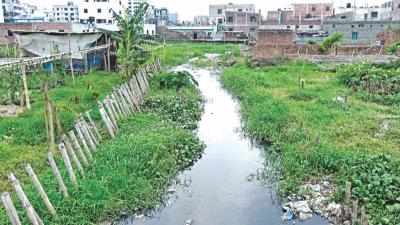 Dhaka, Mar 4 -Minister for Local Government, Rural Development and Cooperatives Mohammad Tajul Islam said all types of structures built illegally on the banks of the capital’s canals will be demolished, besides dredging the canals. The minister also said that the work would be done in a joint effort with the mayors, councillors, administration and people from all walks of life.
He revealed this to reporters after the inauguration of the Dhaka South City Corporation’s Interim Waste Transfer Centre’ (STS).
Earlier today, the minister along with Dhaka South City Corporation Mayor Barrister Fazle Noor Taposh visited Nandipara Bridge (Jirani Khal), Sukh Nagar Bridge (Khilgaon-Basabo Khal, Jirani Khal, Manda Khal and Segunbagicha Canal junction), Kamalapur Canal, Shampur Canal and Panthakunj Park Box Culvert.
Md. Tajul Islam said that the mayors of Dhaka South and North city corporations have been working on this challenge since taking over the responsibility from WASA. Since taking office, the two mayors have started cleaning the canals. Not only that, they are also removing the infrastructures established by illegally occupying the canals.
The minister also said that the ministry has held a meeting with the two mayors to work out a plan of action for the maintenance and beautification of all the canals in the city.
Tajul said his ministry had provided all possible assistance to the two city corporations to control dengue mosquitoes, adding that the number of Anopheles and Culex mosquitoes has increased. “These mosquitoes are not very dangerous, so there is no reason to panic. We are all working together to save the city dwellers from this problem,” he added.
In this context, he said, besides raising public awareness, if the canals and drains of Dhaka city can be kept clean, it is possible to free the city dwellers from the mosquito menace.
Responding to a question on the issue of waterlogging, the minister said the situation will be better this year as the two Dhaka city corporations are working relentlessly to prevent it under the direction of the ministry.
Local leaders including senior officials of the Local Government Department and Dhaka South City Corporation were present on the occasion. – UNB