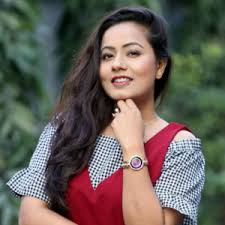 Popular face of the small screen of present time Ireen Tani. Started her career in media working in Badol Khondokar’s movie ‘Bidrohi Padma’. Though she acted in movie but later she engaged herself with acting in the small screen and also performed as model in TV commercials.
In the beginning of this year, Tani performed as a model in a new TVC of GrameenPhone’s new apps. Last week she took part in its shooting. In the TVC, Ireen Tani played the role of an ideal mother. Tani informed that the TVC will go on air only on YouTube in April. Earlier, she also worked in still TVC of GrameenPhone (GP). As a pair, she performed with Zahid Hasan in a TVC of Divine Sea City. Later, she also performed as model in TVCs of various products of RFL and Minister.
While talking about performing as model in different TVCs Ireen Tani told this correspondent, “I always try to remain conscious about working in TVCs. I always have intention to perform as model in good brands’ TVCs. For this reason, number of TVCs is not huge but viewers can easily recall my works. I get huge response for my works. I am very much optimistic about my new TVC of GP. Its story and making were nice.” Recently she finished shooting of Golam Mostafa Shimul’s two movies. Therefore, she has already finished shooting of Kolkata’s movie ‘Maya’.