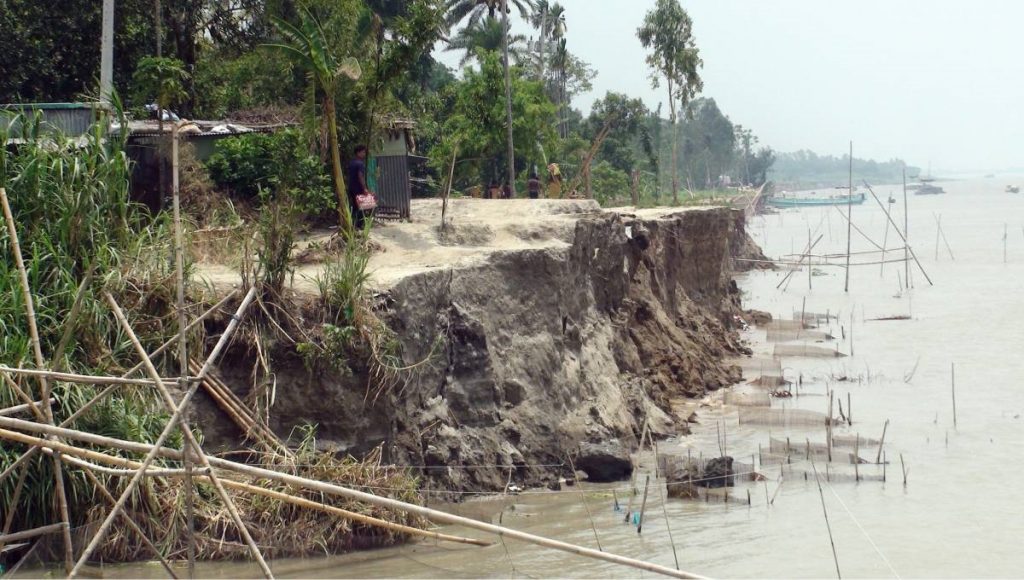 Manikganj, July 12 (UNB) – Over 200 houses and other establishments went into the gorge of the Jamuna River in the last two weeks as erosion by the mighty river has taken a serious turn in Shibalaya and Daulatpur upazilas due to the onrush of water from the upstream.

Fifty dwelling houses in Shibalaya upazila, over 200 houses, including a mosque, a madrasha and a school, in four unions of Daultpur upazilas have already been washed away by the river.

Hundreds of families who have lost their homes have taken shelter at different places.

Officials at the Local Water Development Board said they are dumping sand bags in erosion-hit Charkatari and Bacamar areas on an emergency basis to check the erosion.

Besides, the district administration has distributed rice and corrugated iron-sheets amid erosion-affected families.

Local public representatives said erosion causes havoc on the areas during monsoon each year in absence of any permanent solution to the problem.

Saidur Rahman, an assistant education officer in Daulatpur upazila, said every year many schools are washed away by the river during monsoon.

“This year, two schools have been engulfed by erosion, hampering the academic activities of over 200 students who are now attending classes under the open sky,” he said.

Abdul Barek, chairman of Charkatari union parishad, said Kathaltoli village at this union went into the gorge of the river, rendering over a hundred of families homeless. “There’ll be no existence of the union if long-term measures are not taken to prevent the erosion.”

Daulatpur Upazila Nirbahi Officer Sabrina Sharmin said they are preparing a list of the affected people to give them government assistance.

Meanwhile, Deputy Commissioner of the district SM Ferdous visited the affected areas and told journalist they have already distributed 30 kgs of rice to each of the affected 200families, and instructed the Water Development Board (WDB) officials to take steps to control erosion.

WDB sub-divisional engineer of Manikganj WDB Mamun Hawlader said 6,000 sand bags have been dumped over 120-metere areas in Jionpur and Bachamara unions of Daulatpur on an emergency basis.

Besides, he said, a proposal has been sent to the ministry concerned for a permanent solution to the problem.