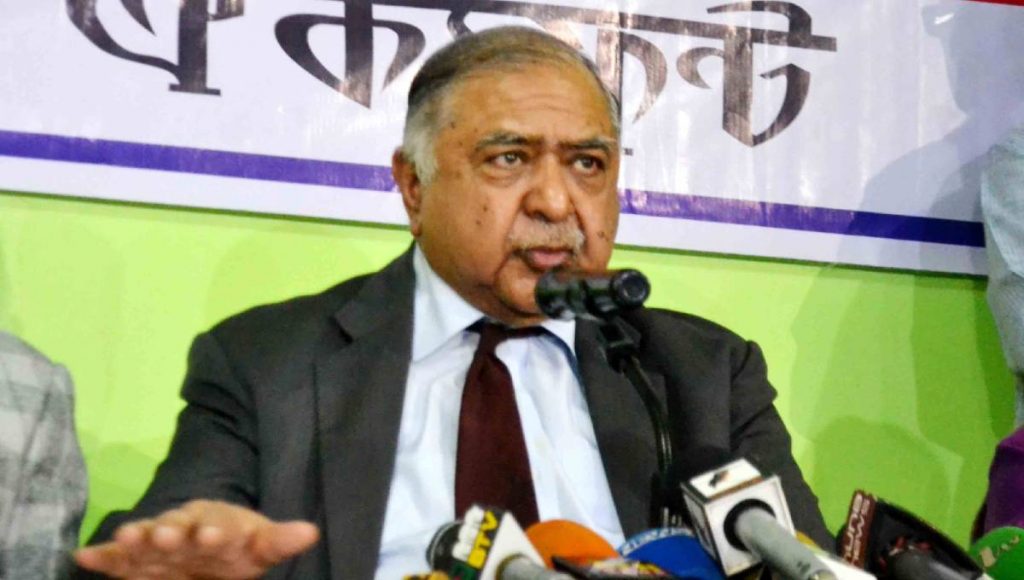 Dhaka, Feb 13 – Jatiya Oikyafront wants to depict the “real scenario of vote robbery” in the 11th parliamentary election before the people and international community through a public hearing on February 24 with Dr Kamal Hossain playing the role of its judge.
Jatiya Samajtantrik Dal (JSD) president ASM Abdur Rob came up with the information while talking to reporters after a meeting of Oikyafront steering committee at Dr Kamal Hossain’s Motijheel chamber on Wednesday.
“Jatiya Oikyafront will arrange a public hearing on February 24, and a court and a trial stage will be set up there. Our sir Dr Kamal Hossain will remain there as its judge,” he said.
Rob further said, “They (AL) are saying majority people voted them. We’ll clearly present before the country’s people and the world whether people voted them or there was a serious vote robbery. We’ll expose their misdeeds.”
He said the public hearing will be held from and .
The Oikyafront leader said they are trying to book any of four the venues–Mohanagar Natya Mancha, Institution of Engineers, Bangladesh, Institution of Diploma Engineers, Bangladesh and the Jatiya Press Club—for holding the programme.
He said their alliance will invite all the political parties, except those who are in the Awami League-led Grand Alliance, who participated in the election to join the public hearing. “We’ll send invitation cards to them. But we won’t invite those were involved in the vote robbery.”
Besides, he said, Oikyafront candidates, the relatives of those killed in the election violence, and those subjected to attacks, harassment and arrest will be requested to participate in the event.
Rob said Oikyafront’s steering committee and coordination committee will also a joint meeting on Sunday next to take preparations for making the public hearing a success.
BNP standing committee member Dr Abdul Moyeen Khan, Gono Forum executive president Subrata Chowdhury, general secretary Mostafa Mohsin Montu and Krishak Sramik Janata League organising secretary Shafiqul Islam Delwar were, among others, present at the meeting held with Dr Kamal Hossain in the chair. – UNB