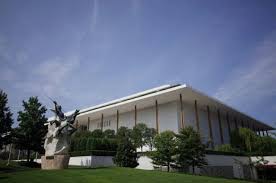 Washington’s Kennedy Center has pushed back its prestigious annual arts awards gala due to the coronavirus pandemic, setting a new date of March 7, 2021.Each year the Kennedy Center — Washington’s performing arts complex that serves as a living monument to slain president John F. Kennedy — holds a night of red-carpet glitz to induct cultural and entertainment figures into its arts pantheon.
But the ceremony normally held in December will no longer take place in 2020, the latest postponement of the winter awards season after the Oscars and the Golden Globes also scheduled later ceremonies than usual.
“Our lives as we have known them have been upended by COVID-19, but the world continues to spin forward and we need artists now more than ever to help light the way,” said Kennedy Center President Deborah Rutter in a statement.
A broadcast version of the event will also air at a later date.
In 2019, the children’s television program “Sesame Street” along with the R&B collective Earth, Wind & Fire were honored. Actress Sally Field, genre-spanning singer Linda Ronstadt and 11-time Grammy winning conductor Michael Tilson Thomas were also among the 2019 class.
Members of the 2020 cohort have not yet been announced.
The Kennedy Center said it expects to lose an estimated $45.7 million in earned income during the 2020-2021 season, with much of its programming canceled, REPORTS afp, washington.