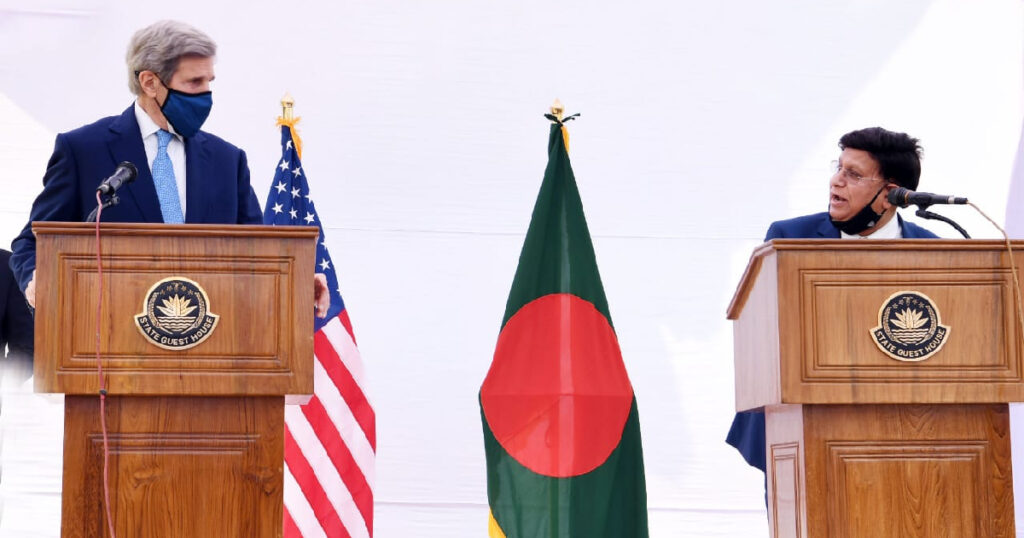 Dhaka, Apr 9: John Kerry, the US Special Presidential Envoy for Climate, arrived in Dhaka on Friday morning to convey President Joe Biden’s commitment to move forward “aggressively” to deal with the global climate crisis. Foreign Minister Dr AK Abdul Momen and his wife Selina Momen received Kerry upon his arrival at Hazrat Shahjalal International Airport at 11:30 am. US Ambassador to Bangladesh Earl Miller was present.
Kerry, who arrived in Dhaka after wrapping up his four-day India visit, will hand over the US President’s invitation to Prime Minister Sheikh Hasina in person to attend the “Leaders Summit on Climate” to be held on April 22-23 virtually.
In India, Kerry said that the Paris Agreement recognises the global need to further empower women in climate decision-making. “That’s why it was my pleasure to meet with women leaders driving climate action and the energy transition here in India,” he tweeted.
In Dhaka, Kerry will meet representatives of the government of Bangladesh and key development and international partners, a State Department spokesperson said.
As the president of the Climate Vulnerable Forum and the Vulnerable Twenty Group of Finance Ministers, the spokesperson said, Bangladesh plays a leading role in combating climate change.
Before his meeting with Prime Minister Sheikh Hasina in the afternoon, Kerry will meet Foreign Minister Dr Momen, Environment, Forest and Climate Change Minister Shahab Uddin and others.
Marcia Bernicat, US senior official for economic growth, energy and the environment, has said that Bangladesh’s leadership in addressing climate change offers the United States – and the world – a great partner to tackle this climate crisis.
As president of the Climate Vulnerable Forum and the Vulnerable Twenty Group of Finance Ministers, she said, Bangladesh can make irreplaceable contributions towards a successful COP26.
As a climate vulnerable country, Bernicat said, Bangladesh will require significant climate adaptation and resilience, especially in view of its increasingly ambitious climate goals.
US companies are well placed to deliver many of the solutions Bangladesh will need to sustainably grow its economy, she said.
US President Joe Biden has invited 40 world leaders, including Prime Minister Hasina, to the “Leaders’ Summit on Climate” that he will host. The virtual summit will be live-streamed for public viewing.
The “Leaders Summit on Climate” will underscore the urgency – and the economic benefits – of stronger climate action. It will be a key milestone on the road to the United Nations Climate Change Conference (COP26) this November in Glasgow.
“We’ll be happy to convey our priority issues. We’ll also share the steps that Bangladesh has taken so far,” Dr Momen told UNB.
He said Bangladesh believes that adaptation is not enough and there has to be mitigation and Bangladesh needs support as promised by others. “It should be Kerry’s special target.”
Dr Momen said Bangladesh did not create the problem and those responsible countries should share responsibility of rehabilitating and protecting people from river erosions.
President Biden has emphasised the challenge of climate change, stating, “The United States and the world face a profound climate crisis and by placing climate change at the centre of our foreign policy, diplomacy, and national security.”
President Biden took action on his first day in office to return the US to the Paris Agreement.
Days later, on January 27, he announced that he would soon convene a leaders’ summit to galvanise efforts by the major economies to tackle the climate crisis, reports UNB .