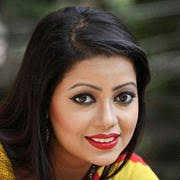 Popular singer Dilshad Nahar Kona revealed yesterday that she had tied the knot with the person she loved, on April 21 of this year. Her husband, Golam Md Iftekhar, is a businessman, and has been in a relationship with Kona for seven years.
Kona was heard saying to the reporters: “We have been seeing each other for almost seven years. But we have known each other for a far longer time. Honestly, we do not like to bring our personal lives in the limelight. The wedding was arranged by our families. None of the families wanted the news to be spread. Therefore, the marriage happened in secret.”
Kona also revealed to the reporters that the marriage had the full consent, and support of both families. “Only the aqd (formal signing of the Muslim marriage contract) has been completed. I am still living in my own home. Wedding reception, going to in-laws or honeymoon; none of it has happened yet. We will do them gradually.”
Kona’s husband Golam Md Iftekhar was raised and educated in Dhaka. He had been a long time friend of Kona, even before their seven-year-long relationship. Many speculations were made previously about their relationship, however, the newly-wed couple never said anything to the media before this.