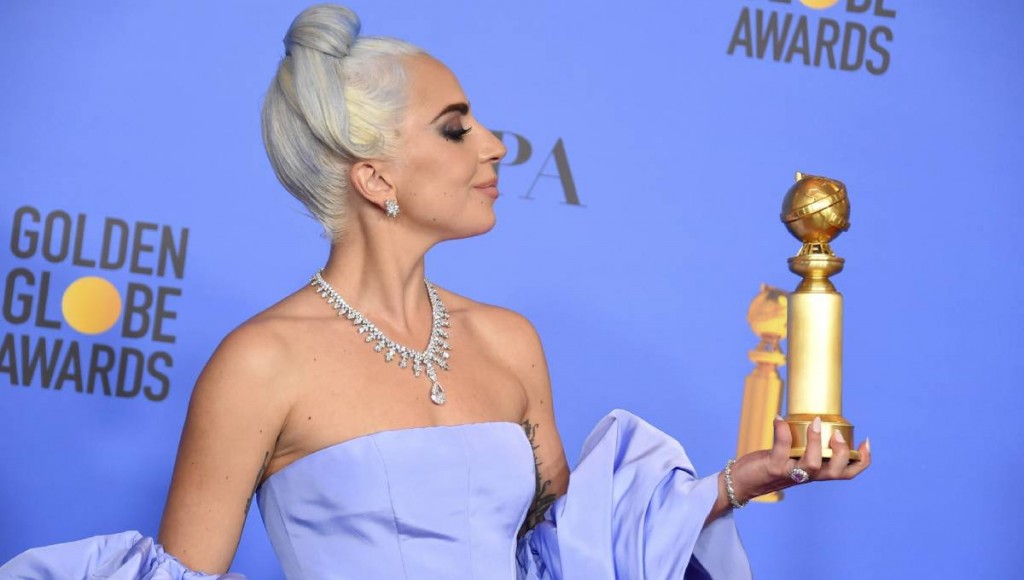 Lady Gaga was in tears when it was announced she won the second Globe of her career Sunday night for co-writing “Shallow” from “A Star Is Born,” and she has a chance to win another honor later in the show for her acting chops.
Gaga picked up best original song — presented by Taylor Swift and Idris Elba — at the Beverly Hilton, sharing the win with co-writers Mark Ronson, Anthony Rossomando and Andrew Wyatt.”As a woman in music it is really hard to be taken serious as a musician and as a songwriter,” Gaga said onstage, adding that her co-writers “lifted me up, they supported me.”
In 2016, Gaga won best actress in a miniseries or motion picture made for television for her role in FX’s “American Horror Story: Hotel.”Her critically-acclaimed role in “A Star Is Born” earned her a nomination for best performance by an actress in a movie drama, pitting her against Nicole Kidman, Melissa McCarthy, Glenn Close and Rosamund Pike.
“Shallow,” performed by Gaga and Bradley Cooper, earned four Grammy nominations, including song and record of the year. The track also reached platinum status and became a Top 5 hit on the Billboard Hot 100 chart.
The song, shortlisted for best original song at the 2019 Academy Awards, beat out some heavy-hitters at the Globes, including Kendrick Lamar and SZA’s “All the Stars” from “Black Panther;” Dolly Parton and Linda Perry’s “Girl in the Movies” from “Dumplin’;” Annie Lennox’s “Requiem for a Private War” from “A Private War;” and Troye Sivan and Jonsi’s “Revelation” from “Boy Erased.”
Justin Hurwitz picked up his third Golden Globe when he won best original score for “First Man” on Sunday. Hurwitz, an Oscar- and Grammy-winner, beat out Alexandre Desplat (“Isle of Dogs”), Marc Shaiman (“Mary Poppins Returns”), Ludwig Goransson (“Black Panther”) and Marco Beltrami (“A Quiet Place”).