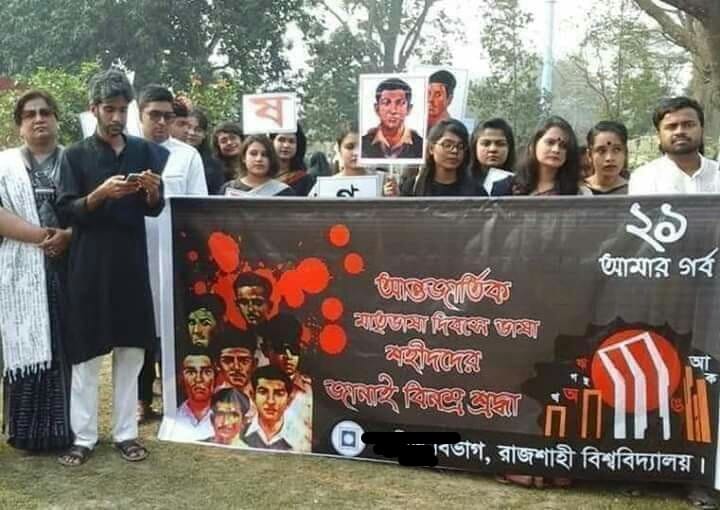 Rajshahi, Feb 22 – Rajshahi University Music department used a banner in the ‘Prabhat Feri’ program on 21st February where the pictures of 7 Bir Shreshthos liberation war were used. Many in the university criticized the matter. Senior professors said that such types of mistakes amount to dishonouring the language martyrs. But the department people say that they did not do that to dishonour anybody.
According to the department, they decided to pay homage to the language martyrs on the morning of 21st February and made the banner.
There were 7 pictures on that banner. But they are not the pictures of language martyrs Salam, Barkat, Rafiq, Zabbar. They are the pictures of the Bir Shreshthos, who sacrificed their lives in the great liberation war.
The banner including picture went viral on a Facebook page named ‘Rajshahi Biswabidyaloy Poribar’. The photo was posted on that group by an ID named Rezwan Hossain criticizing the matter in the caption of the post. Many made bad comments on the same.
Rajshahi University History department Professor Abul Kashem said that the mistake of the Music department is inexcusable.
Music department chairman Prof. Dino Bandhu Pal conceded the mistake and said, We told the press to use pictures of Bangabandhu, language martyrs and liberation war martyrs. But it was the mistake of the press that they used only liberation martyrs’ pictures.
University pro-vice-chancellor Prof. Ananda Kumar Saha said the music department did such a non-sense work. I hope that they will be conscious of this in future. – RU Correspondent